SGRA China Forum in 2015 was held at the Inner Mongolia University in Hohhot Mongolia and the Peking University in Beijing under the title "Two Hundred Years History between Japan-China:Re-consideration from the View of Cultural History".

I met Dr. Nemekhjargal (2008 Raccoon) and Dr. Rinchin (2009 Raccoon), both of them are from the Inner Mongolia University, at the Hohhot Airport in the evening of November 19, 2015. It was unusually warm that night. Dr. Rinchin drove his new car by himself. We greeted each other: "Long time no see!"

Next morning Dr. Naheya (2011 Raccoon) brought me to have breakfast together with Dr. Liu (International Japanology Research Center) who is a lecturer of the Forum, and Dr. Wang Zhong Shen (Tsinghua University) who is a panelist, and Dr. Sun Jianjun (2003 Raccoon, the Peking University), a participant. We had steamed mutton meat bun. After sightseeing, we held the China Forum at the Research Institute for Mongolian Study. About 100 teachers and students of the Mongolian History Department came together and had a lively discussion after Dr. Liu's lecture. I thanked the three Raccoons for all their help, starting from social gathering at night over "Shabu-shabu" and Mongolian style breakfast next morning. Then I left Hohhot. But, sorry to say, I forgot to take photos of the activitie. Dr. Nemekhjargal, Dr. Rinchin and Dr. Naheya! Let's take commemorative pictures first at the next Hohhot Forum.

We had dinner at Taiwan food restaurant named "Ling Du Kong Jian", which is located in the shopping mall near the subway station "Wu Dao Kou Yi". I felt an affinity to this restaurant which is located near a subway station, like Tokyo. There were four Raccoons, besides the seven Raccoons mentioned above, who are living in Beijing and Tianjin . They were communicating with each other, using the Chinese "LINE". These four Raccoons were: Dr. Song Gang (2008 Raccoon), who was on a business trip to Xiamen; Dr. Liu Jian (2008 Raccoon), who had a baby recently; Dr.Xie Pu (2013 Raccoon) who was also on business trip to Shanghai: and Dr.Hao Liang (2013 Raccoon), who lives in Tianjin and made a last-minute cancellation. All of them sent us messages, and Dr. Sun returned to them photo message of us.

Before I came to Beijing, I hoped to see blue sky in Beijing. The forum was held at the Peking University in the afternoon of November 22. It was a Sunday and snowed heavily, but more than 50 people gathered and had a lively discussion. Dr. Yang, Yu Gloria (2015 Raccoon), who came to Beijing for the forum, took many photos of the forum, though she could not join the Raccoon-kai the previous night due to a fever. After the forum, we had a social gathering at a memorial (provincial) hall called "Zhi Li Hui Guan", next to the hall where the forum was held. As we were allowed to bring in wine even at a high-class restaurant, we asked Dr. Kim to buy Bordeaux wine, using the Raccoon network. Thank you very much!

It was very fine day on November 23 in Beijing when I returned to Japan. While in Beijing, we could see the snow-covered tower of the Summer Palace (an Imperial Garden) from the rooftop of the office of the Peking University where Dr. Sun is studying.
No doubt about it, the sky of Beijing in autumn is blue! 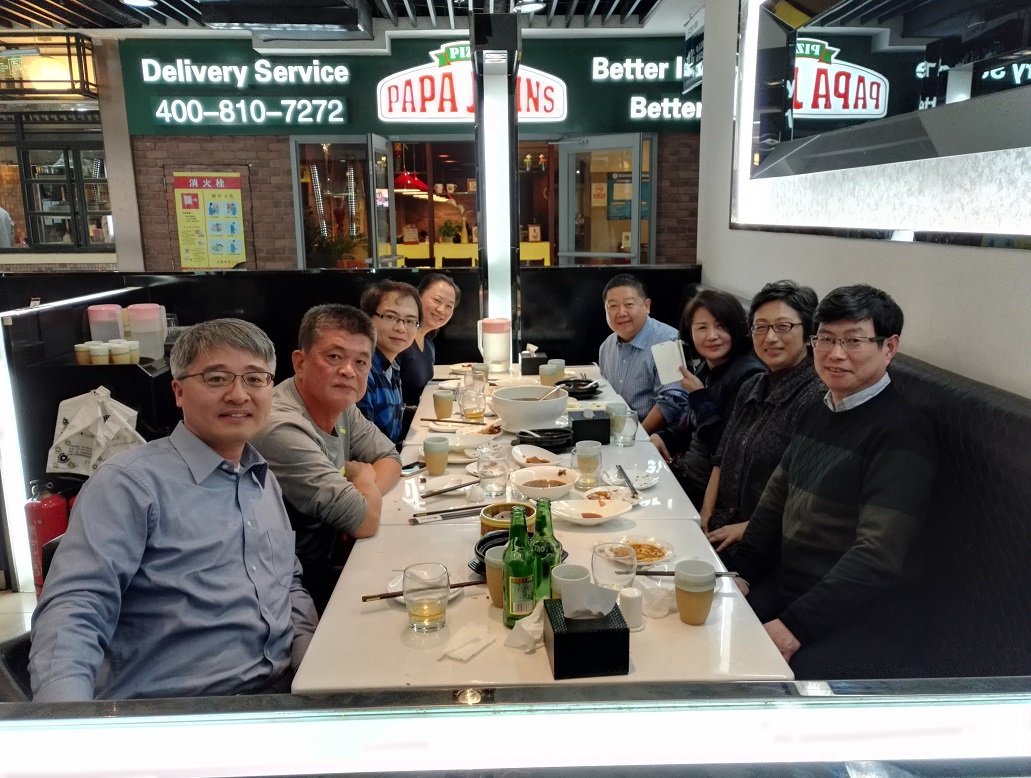