Four Raccoons (Dr. Jin Xi, Dr. Shi Jianming, Mr. Yaku Yao Hui and myself - the first scholarship students of Atsumi International Foundation in 1995) met together with Imanishi-san at a Chinese restaurant in Sinjuku on Halloween night, without any special costumes. Three Raccoons came from China and one from the Philippines, a island country in South East Asia. We had met at Atsumi Foundation in 1995, 20 years ago. Since Dr. Jin, who lives in Beijing now, was visiting Japan, Imanishi-san called up three of us, who are living in Tokyo.

We stayed for four hours in the crowded restaurant, chattering on many topics, like health, education for children, etc. There was no end on the number of topics to talk about. Before I entered the restaurant, I thought the main issue tonight, needless to say, would be the ongoing territorial dispute over the South China Sea. China, Vietnam, Philippines and other countries are disputing on territorial rights over the Spratly Islands. Each country has started construction works on one of disputed islands for the purpose of effective territorial control. China, however, proceeded for several years now with land reclamation which can be utilized for military base. These constructions are proceeding very rapidly and have increased tension in the area atmosphere involving other advanced countries outside this territory.

After enjoying beer and Shaoxing (Chinese) wine, this issue was taken up. I, 12.5% Chinese, criticized the hawkish attitude of the Philippine Government and explained how I love China. I have a few relatives who are married to Chinese nationals. When I had heated discussions on this issue on Facebook this summer, I urged rational discussion as much as possible. Most of the Philippines are delighted with the support from the advanced countries who are outside the territory, like America and Japan.

Frankly speaking, I have believed that East Asia could enjoy prosperity without any military basis of the US in the territory. I grew up in an atmosphere of "China Threat Theory" which affected to the Anti-communism policy of the Philippines. So, my feeling mentioned above, was unexpected.

I told three Chinese friends on Halloween night that, though China recently tried to grab the Spratly Islands by both hands, the sands have fallen out between the fingers. At the second Asia Future Conference at Bali-Island in 2014, I made a key-note speech commenting "China changed to a brutal dragon from a cute panda". I profoundly hope for solidarity of the East Asia. But it all depends on the friendship of the countries which respect each other. Dr. Shi, who also likes mathematics, has doubt about the behavior of China.

Mr. Yaku, who has a slight change since 1995, 20 years ago, referred to the goal of SGRA of "Actualization of Good Global Citizenship". He shared with me his anxiety that the idea of "global citizenship" is weakening. I responded immediately that, because of this, we have to think of this goal more and display our positive ability to the full. I do not know how Mr. Yaku understands my words. But I really think so. I am really concerned about how Atsumi scholarship students who follow us, are aware of this.

When Imanishi-san let me inform them that SGRA Philippine will hold its 20th Japan-Philippine Shared Growth Seminar (Theme: Human Ecology and Sustainable Shared Growth) on February 10, 2016 at Ateneo de Manila University, Mr. Jin, who is the heaviest drinker among us,asked others to join the seminar together. Though this comment may have come from more than ten beer mugs, I was very glad to hear that. I was very happy we could talk like this, even if we cannot organize such occasions more often.

I had to say good-bye. I saw off Raccoon colleague Dr. Jin,who has no significant change in my image after 20 years and was a joyful and drunken raccoon tonight, until he rides on the subway train without losing his way in the crowds on Halloween night. 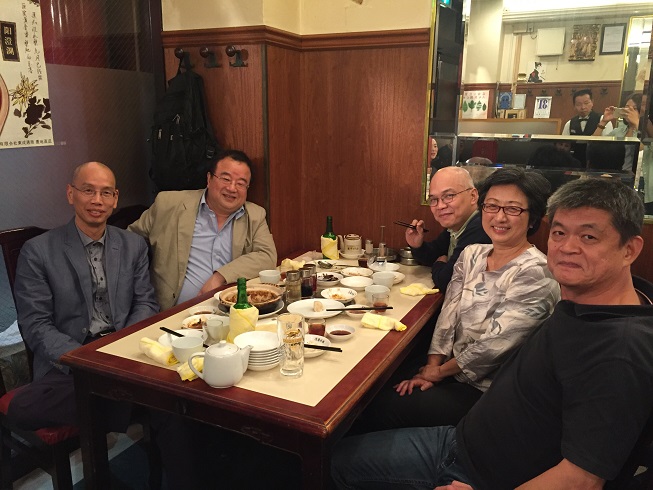