On March 5th, 2021 (Saturday), the 2021 Atsumi International Foundation research presentation session was held at the foundation hall with quasi emergency measures in place. The cherry blooms seemed on the verge of blooming under the cloudy sky, and as my heart thumped with nervous anticipation I walked up the hill to the venue. Most of the presenters were dressed in formal wear, and the nervous atmosphere was very different from usual.

Unlike previous years, this year's session was split into two parts. The first session was the spring group which presented in March, and the second the autumn group, presenting in September. As the session was held simultaneously in-person as well as online it was possible for each presenter's thesis supervisor to participate online as a commentator.

This year, as in previous years, each presenter was told to prepare a presentation that would "explain in 15 minutes your PhD research in such a way that even a child could understand it." Being used to speaking to an audience of academics and giving academic presentations, presenting our research in a limited amount of time such that even a child could understand it was certainly no easy task. However, it also became an opportunity to look at our research objectives and arguments from a new perspective. At the start of the session, the Chairperson of the Atsumi Foundation gave opening remarks, and I listened to him share the aims of the foundation as well as his personal expectations for the scholarship recipients. I once again confirmed my understanding of the work the foundation does in furthering international cooperation, as well as the tremendous support it provides for youth aspiring to be researchers.

Up next were presentations by seven of the Atsumi scholars. I spoke about the formation of a national language in modern China, and focused on the role that the phonetic alphabet movement during the late Qing period played and discussed the significance of rethinking the dilemma of diversity and homogeneity in forging a Chinese national language. Hu Shi presented about the possibility of using lignin, commonly treated as a "nuisance," as a "hero" and the possibilities of building a sustainable society. Chen Yijie looked at the Chinese artist Fu Baoshi, and discussed the influence of Japan on Fu and interactions between Japan, China, France and England in the art world in the first half of the 20th century. Focusing on the "Southern School" of Chinese painting, which has come to be recognized as the core of Chinese art history, Li Zhaoxue discussed how the Southern School came to be formed and its development, as well as the role it played in developing the image of Chinese art today. Oksana Kakin spoke about Japanese idol fan culture, and the love of and appreciation for "precociousness" that is seen as characteristic of it as well as discussed the necessity of developing new research from a gendered perspective on Japanese culture and international fan cultures. Hilman examined obstacles for automated vehicles, and suggested the "Semi-Automated Active Learning" (SAAL) system as a means of preventing accidents. Explaining the purpose of his dissertation, Yue Qu spoke about the relationship between early Japanese literature in Chinese and the Japanese Ritsuryo state, and discussed why the Japanese Ritsuryo state was important for the formation and development of literature in Chinese, and why the progress and development of literature in Chinese was necessary for the Japanese Ritsuryo state.

After the presentations, we received valuable feedback from Nakamura Motoya sensei, Kataoka Tatsuji sensei, Sato Doushin sensei, Hirakawa Hitoshi sensei, Tanahashi Satoshi sensei, Ito Toshio sensei, Shi Jianming sensei and Kono Kimiko sensei. These comments allowed us to gain rare insight into how research supervisors and committee members view the progress of scholarship recipients, as well as to understand the importance and urgency in considering how our research can be used in our own way to deal with the problems the world faces today. I would like to reflect on their comments, and for each of us to work towards achieving our goals with each new day. 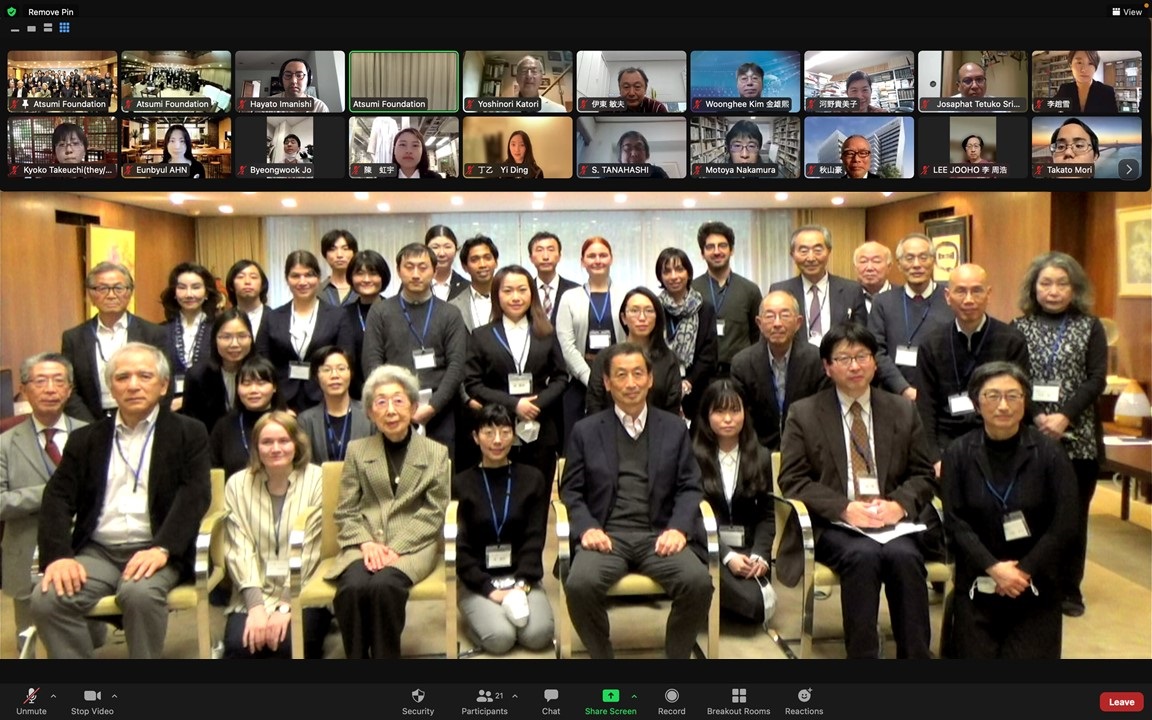