On January 15, 2022, the annual new year party was once again held at the Atsumi Hall. The Atsumi fellows and staff as well as Raccoons joined forces to make gyoza and mochi. After that, there was a birthday celebration for former Executive Director Itsuko. The 2021 fellows prepared a bouquet of flowers and cake for her, and also presented her with a present. Because of the extended pandemic, the new year party was once again held on a small scale with fellows from 2021 and 2020 and some of the foundation staff.

East Asia served as the backdrop for this year's new year party, and it became a party that crossed cultural borders. For the new year, "mochi" is a must in South Korea and Japan, whereas in China - specifically the north of China - it is gyoza. And of course, in east Asia the new year is all about family gatherings. In Chinese, there is a word (Nian Wei (the flavor of new year)) that depicts the lively atmosphere of the family gathering to make and eat gyoza together. However, in recent years there have been more people who have moved to other cities for work and are unable to return to their homes for the new year, and many more who refrain from returning because of the coronavirus. In China, there is a recognition that there is increasingly less "Nian Wei." Coming from China, I could feel this increasingly rare sense of "Nian Wei" through making gyoza together with everyone from the foundation and eating and talking together. Furthermore, it was my Atsumi Foundation family, with members gathering from all over the world, that gave me this feeling of "Nian Wei."

While experiencing east Asian traditions at this year's new year party, I also felt something new. Preparing the new year meal is also very gendered in east Asian society. In China, women from the family gather in the kitchen to make gyoza, and in Japan men are believed to be strong and as such pound the mochi - roles are broken up as such almost "naturally." However, at this year's new year party people made gyoza and pounded mochi together regardless of gender, and though this might be modest I felt a real change.

Those who were unable to attend in person because of the coronavirus extended their well-wishes to former Executive Director Itsuko via Zoom. There was even a Raccoon who was joining from Italy at 5am, and while it is a shame that we are unable to meet in person because of the coronavirus, thanks to technology we are able to bridge time and place. Through connecting Raccoons all over the world from different times and places, the Atsumi Foundation new year party really became an "international environment." 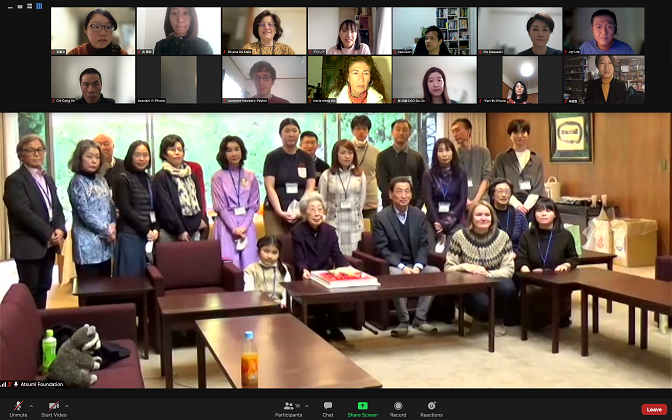