On May 15, 2021, an online gathering for the current scholars was held about "books I liked as a child/books that influenced me." As was the case for the presentation session in March, this event was held in person as well as online via Zoom. Thanks to the host and well-managed visual, audio, and streaming functions the event went very smoothly.

After each participant shared their name, hometown, and university, they talked about "books" for about three minutes - books they liked in their childhood, books that left an impression on them, and books that influenced them. Soon after we started, it became clear that restricting the discussion to "childhood" was the right choice, and this in itself became a great "ice breaker." Most of the people participating were meeting each other for the first time, or meeting each other through the screen without meeting in real life, or had never really had a conversation with each other and hardly knew one another. In a "first gathering" of a crowd like this the "ice" is especially thick, but as everyone started talking fondly about the books they loved as a child that "ice" quickly melted away.

If the theme had been "the most influential book in your life," there would certainly have been complex books or specialist books brought up, but because the focus was on books one loved in childhood people shared instead picture books and manga, detective novels, adventure stories and so on - things that anyone could empathize with and had read or heard about. Because most of the foundation staff and scholars are of the same generation, we shared many references which led to a cozy atmosphere - "I also read that manga," "I'm reading that picture book with my grandchild," "I like the movie version of that book."

The presentation order wasn't based on where you were sitting or alphabetical order, but rather the person presenting chose the next person to speak. There was a feeling of suspense because you didn't know when you would be called upon, and I'm sure I wasn't the only one who felt that way.

Opportunities like this that make you feel warm inside are especially important given the current COVID situation that is rampant with bad news. As PhD students we all work at our own pace, and without peers it is easy to feel lonely. However, seeing the faces of my fellow scholars as well as the kind staff I felt incredibly encouraged. I'm sincerely grateful to everyone who participated in this gathering. 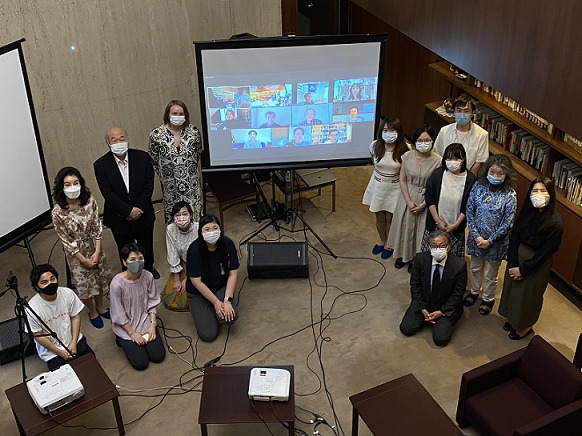