On March 6, 2021 (Saturday), the 2020 Atsumi Foundation Scholars Research Presentation Session was held at the foundation hall in the midst of the emergency declaration. Making my way up from the station and crossing Edogawa Bridge, I could hear the cheerful voices of children playing under the cherry blossom trees; the slightly burgeoning buds of the flowers seemed like they were eagerly awaiting spring.

I entered the building, and like last year, all of the participants were wearing masks. It has been said that the masked face has become representative of life in 2020. With the global spread of the novel coronavirus, all foundation events have been held in-person as well as simultaneously online. As a result of this alumni as well as lecturers from far away have been able to participate online in events.

The event started off with greetings from Executive Director Atsumi Itsuko, and she also told us about Japanese traditions related to the hina matsuri (Dolls' Day/Girls'Day) as well as her own experiences in getting her doll collection. It almost felt as though we were receiving some of the love that the Executive Director's grandmother had given her.

Next up were the PhD research presentations. Using Powerpoint, we had to explain our research in 12 minutes in a manner that even a child could understand. There were presentations from a diverse range of fields - Koo-san's examination of "what is considered Japanese" through critical discourse on Ozu's films in the 1930s, Yu-san's research on the politics of naming and sexual minorities in China, Wu-san on Natsume Soseki and the concept of the English novel, Maierdanjiang-san on treatment looking at the response of alpha-synuclein when dopamine neurons are added, Cho-san on discussions of the historicity of the student protests at Nihon University, Laurence-san's comparative research on English phrasal verbs and Japanese compound verbs, Miao-san on the acceptance of Japanese literature in China in the 1980s, Yun-san on the mechanics of the politics of victimization and policy changes, Yuan-san's comparative work on Chinese and Japanese understandings of accountability in the cooperative role of bystanders in bullying, Shishkin Victor-san on the technological development and implementation of fiber optic sensors, my work on the acceptance of Ishikawa Takuboku in colonized Taiwan, Yang-san's research on the stories of Saikaku, Lee-san's research in clinical psychology on the understandings of self and others in people with mental disabilities and Yong-san on the use of finger movement patterns in the development of light-weight EMG artificial arms.

Given the limited time, I once again realized the importance of explaining research in an easy to understand manner. I was also moved by my fellow batchmates who had run out of time but still wanted to do their best to convey their research findings, and the passion that they clearly had for their work. After the presentations we received valuable feedback from our seniors. Professor Usami Takeshi from Chuo University and Mr. Akashi Yasushi, former Under-Secretary-General at the United Nations, also greeted us over Zoom, and told us that there aren't many opportunities for researchers from different fields to present their work in the same space and that they were grateful that there are opportunities like today's presentation session. I felt that we have been able to expand our horizons through interactions like this, as well as to think about our research from new perspectives.

On the other hand, foundation board members Dr. Kataoka Tatsuji and Professor Hirakawa Hitoshi, who were both attending in person, told us that it was necessary to throw some things out when making a presentation in a limited amount of time. They also told us that in order for a presentation to be more effective, we shouldn't just say everything, but rather speak in a manner that would be more inviting for the listener. Like me, most of the fellows are probably used to presenting amongst other researchers and as such are used to getting submerged in the content of one's presentation. I thought about how important it is to leave aside the contents of one's research, and instead think about the importance of making one's presentation memorable - not to get drunk on the feeling of giving a monologue, but rather to think about the listener and organize one's presentation accordingly. The comments from the board members were very useful.

The emergency declaration has yet to be reversed, and it was a shame that we could not celebrate afterwards. After the presentation session, we didn't really want to part, so we stayed at the hall and shared in discussions with each other. Imanishi Junko, Associate Director of the foundation, said that it would be nice if we could have a party and toast with beer. Ms. Ishi Keiko said that it was a shame that we couldn't make gyoza together, but that after the coronavirus has gotten under control we should have a dinner party together. "Thanks to" the coronavirus, this year we have experienced the difficulty of doing what once used to be normal. We were awash with feelings of reluctance to leave, but looking at things positively, I'm looking forward to continuing my relationship with everyone as a member of the Atsumi family from now on.

I would like to make use of this opportunity to thank the staff of the Atsumi Foundation for everything they have done for us fellows this year.
From the bottom of my heart, thank you! 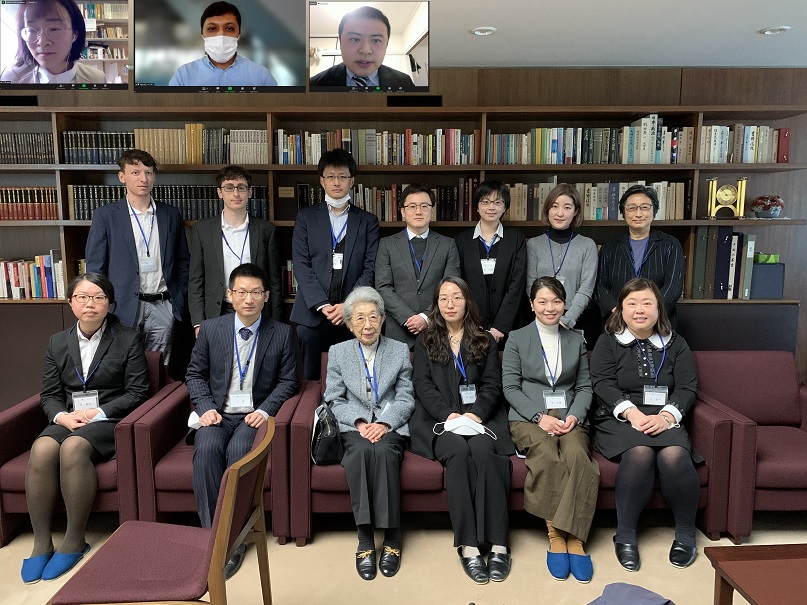