I was invited to join the virtual Raccoon Kai (alumni get together of Atsumi Foundation) for the 1996 batch. The conversation naturally revolved around Dr. Khin Maung Htwe in Myanmar. He shared with us his concerns about Myanmar's on-going coup: there's no visible leadership on the other side unlike in the case of Suu Kyi; the longer the resolution of the conflict is delayed, the more destructive it would be; neither side appears to be open to dialogue. Japan, he says, as an intermediate party, could play an important role in resolving the conflict. (Somehow, it is good to know that the Japanese ambassador to Myanmar is fluent in Burmese) ASEAN's hands are tied by the non-interference policy, but I expressed my wishes for a speedy resolution.
Ordinarily this get together would be held over nibbles (Tsumami) and drinks. But, everyone promised to do so when visiting Khin san, when the pandemic and coup have died down, at his Hotel AKIMOMI. It is nostalgic to know that the hotel was inspired by our summer retreats, organized by the Atsumi foundation, to Japan's mountain resort, Karuizawa : )
Thank you Junko Imanishi for the invitation. It was very good to see Rijicho (Atsumi Foundation Chief Director Itsuko Atsumi) as well as my fellow alumni Drs Nae-Chan Lee, Kijeong Nam, Woong Hee Kim and Tingyao Tzu.
See you soon. 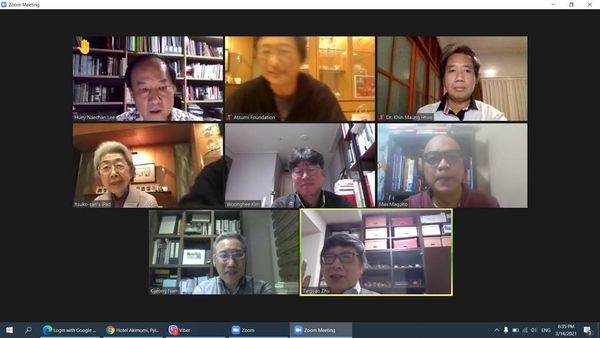