Report of October meeting in 2020

On October 14th, the regular meeting took place.The theme was "If only something like this existed: Making a 'dokodemo pedal' ".

Dr.Yin Feilong, a 2012 scholarship student, introduced the "dokodemo pedal,"a foot operated disinfectant pedal that he developed. The "dokodemo pedal" is made of wood and can be produced at low cost. It also has various merits such as being able to adjust according to the situation. For example, the height is adjustable so that children of all heights can use it safely at school. Best of all, it solves the problem of having to touch the container when we disinfect our hands. According to Yin san, the "dokodemo pedal" has been developed successfully, but it will take time to spread. However, there are many situations where it could be used such as the Tokyo Olympics in 2021.

After Dr.Yin's lecture,the scholarship students at the Atsumi Foundation Hall were divided into 3 groups and started making the "dokodemo pedal". The students who participated via Zoom were also challenged to make it using the parts that had been sent to them in advance. At the meeting in September, the differences between the humanities and sciences had been discussed,and the humanities students in the hall, myself included,were sometimes confused while making the pedal. Making it took a little longer than planned, but thanks to Yin san the pedals of the 3 groups were completed successfully.When I disinfected my hands using the pedal we built as a team I felt a sense of accomplishment.These pedals will be used in the Atsumi Foundation Hall.

While we were struggling in the hall, the participants on Zoom prepared for the discussion. After we discussed the troubles and problems caused by COVID-19,various topics like the increase in suicide, worries about being unable to go out freely,and so on were raised. As a result, it was decided by a majority vote that the theme for discussion would be "how to communicate effectively with a mask on."

When people wear masks,we cannot see how their mouths move,so it may be difficult to communicate. Transparent masks and face shields are effective,but they also have the problem of fogging up. I'd like Yin san to develop a mask that doesn't fog up, just as he developed the "dokodemo pedal" and the smartphone stylus.

There were also some opinions that the daily routine of living with COVID-19 has not
prevented us from communicating with each other. In addition to print and the telephone, various communication methods like online lectures and online meetings have been rapidly increasing. I once again thought that the impact of COVID-19 varies greatly by profession and industry.

The regular meeting in October included making something which made for a refreshing and fun meeting. I think we were able to overcome communication problems and have meaningful discussions.I would like to take this opportunity to thank Yin san for coming to the meeting and the Foundation staff for their various preparations. 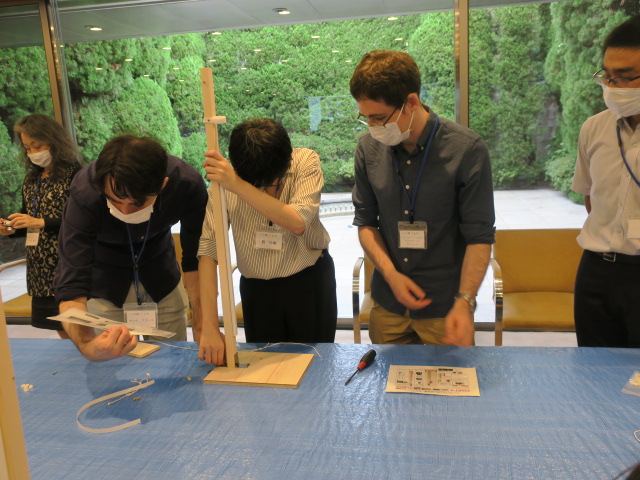