July 5th
I believe it was around 8pm when I arrived at the Tateshina mountain lodge, which was situated in the midst of a dense forest. At that time everyone from the foundation was gathered and sitting comfortably on the sofas in the lounge, engaged in a lively discussion behind a board on which pieces of paper were tacked on. The theme of this year's workshop was "AI isn't scary!" and as a warm-up everyone had written their ideas about "what I want to become AI" and "what I don't want to become AI" on pieces of paper and stuck them on the board. Having just endured months of writing and finally submitted my paper to the publisher, I half-jokingly wrote "write papers" as something I would like AI to do. However, others had written down more serious issues such as "world peace" and "surveillance." It was interesting to note that topics such as "child care" and "translation" were divisive, with some wanting AI to perform these tasks and others against it. This became the starting point for our discussion which moved into thinking about the extent to which technology can be trusted, and what tasks should remain the responsibility of humans.

July 6th
After having breakfast (which was a luxury in itself and consisted of a variety of dishes), we had the second session of the workshop - the lecture. The speaker this year was Professor Lee Joo-Ho, a professor at the College of Information Science and Engineering at Ritsumeikan University. Professor Lee, a Raccoon from 1998, is an authority on AI and fields such as robotics, computer vision and machine learning. Although without a doubt himself a firm believer that "AI isn't scary." Professor Lee provided us with an objective and concrete perspective, discussing the history of AI, the fundamentals and contemporary state of machine learning, neural networks and deep-learning and so on. His talk was clear and easy to understand to the extent that a complete outsider to the field such as myself even thought "I got it!" while listening to him.

The third and fourth sessions of the afternoon consisted of group work in which each group had to perform a skit about a given theme. Given the contents of the morning's lecture, we had to sort out our own thoughts on AI and concisely articulate our ideas. My group was given the topic "AI comforts humans," but other topics included "what if AI created a hit love-comedy," "AI and love," "AI and loneliness," and so on - all interesting topics in their own right. The skits created based on these themes were all riveting, and in contrast to the morning's lecture which praised AI they delved into the limitations of AI with a good dosage of nonsensical humor.

After group work we moved to the golf course for the banquet. Following the opening toast we all gathered around the luxurious buffet spread. It seemed we were all hungry after a day of hard work. I always regret not being able to speak with more people at events such as these, but conversing with one of the foundation's staff members I was pleased to discover that the teacher who had inspired my love of medieval scrolls when I was an undergraduate student was a mutual acquaintance of ours. It made me once again surprised at how small the world is, as well as made me feel more familiar with the foundation.

July 7th
After waking up early and reflecting on the workshop, we got on the bus to head back. With a break at the Tateshina Free Garden for shopping and lunch, the bus rode along mountain roads and in no time we were on the plains of Kanto. We arrived at Shinjuku station perhaps around 3pm. It was raining quite a bit, so once we got into the station we bid each other farewell and went our separate ways.

After spending three days together with everyone thinking about whether AI is scary or not, I have to admit that I still have not made up my mind on the issue. In my field of study, I often read historical documents from people from a thousand years ago, and often get the impression that people long ago used to worry unnecessarily. Perhaps in the future, people will look back on the discussions about AI that we are having today and think that we worried too much about it. However, feeling uncertain about the unknown and cautious about the future is intrinsic to being human. In that regard, this workshop in which we discussed the future of AI with a healthy dose of caution was, without a doubt, not "unnecessary." 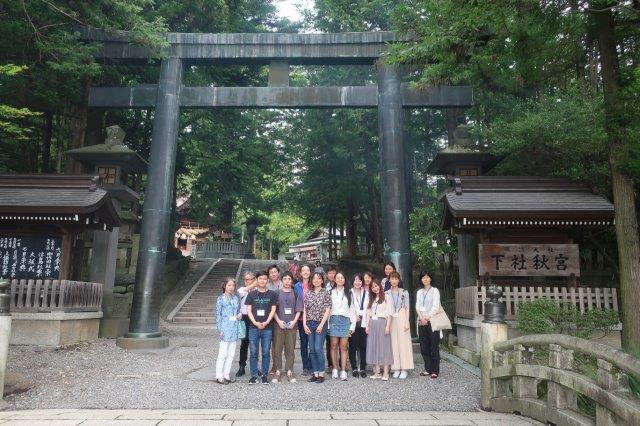