BBQ Party in the Height of Summer

Jon-dali, the name of the typhoon which in Japan was just known as typhoon No. 12, hit Japan on July 28. Jon-dali means skylark in the Korean language and North Korea (the Democratic People's Republic of Korea) submitted this name to the typhoon Committee.
Jon-dali attacked Tokyo on the day when we had our annual event, BBQ party in the height of summer.

Typhoon Jon-dali took an unexpected and unprecedented route. I do not know whether it has any relation with the deadly dangerous hot summer of this year.

Speaking of unexpected occurrences, I remember it also rained during the Tateshina Work Shop which was held from July 6-8 this summer. Although we had difficulties in receiving phone signals, we could enjoy those three days taking in the freshness of the woods and the warbling of birds in nature. Amidst the mist which created a mystical space, it felt to me that time had stopped.
I remember well that I wanted to finish my doctoral thesis in such an environment.
On the morning of July 7, however, I was awakened from my dreamy feeling by the news in a newspaper which was delivered to my lodging and reported the disaster area and the number of the dead and the wounded.

In the continuation of such unanticipated situations, we had a lecture meeting and BBQ
Party which would help to beat the summer heat.

No. 11 SGRA Cafe (The complex triangular relationship of Japan, China and Taiwan) and BBQ party in the height of summer.

More than 40 people, including staff members of the Atsumi International Foundation, Raccoon members and their families and the guests, gathered and listened to the lecture of Professor John Chuan-Tiong Lim (National Taiwan University and Assistant Researcher of Central Research Academy). He talked about the origin and the present problems and issues as well as the future prospects regarding relations among Japan, China and Taiwan from the viewpoints of political science. During the question and answer session, a guest brought up the economic viewpoint, and I, as one of the outsiders, could learn about these issues from a multi-dimensional perspective.

After the SGRA Cafe, we had a BBQ party as our social gathering. Usually, people enjoy BBQ at the inner court of the hall on the second floor. This year, however, due to the slanting rain, we barbecued at the front of the entrance (under the roof) and delivered the food to the second floor. As three senior staff members had already prepared well beforehand, I could start the barbecue and deliver very smoothly. Seafood, such as scallops, oysters and cuttlefish, roasted chicken, beef steak and sausages, everything was tantalizing to me as a beer drinker. Altogether seven or eight members were in charge of barbecue and delivery. And, as it took time to barbecue and deliver, we toasted together enjoying hot and fresh BBQ (reluctantly or on purpose?). We might have been more lively than the second floor.
I could talk together with my fellow 2018 Raccoon friends in the latter half of the party on the second floor.

At the end of the BBQ party in the height of summer, the typhoon had gone. It was too good to be true, but it had stopped raining.

I think words expressing unusual change have been used a lot this year, such as extraordinary, irregular and heresy (President Trump and Kim Jong-un, Supreme Leader of North Korea).
I would like to watch carefully what kind of unusual change will happen - including in my research - in the latter part of this year. 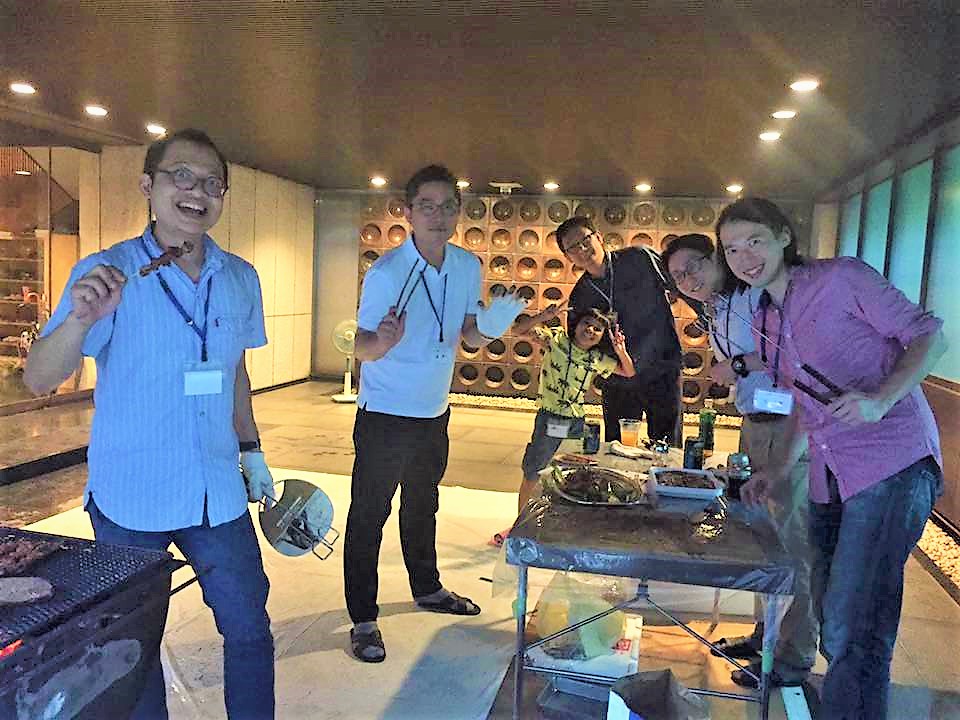