We had the annual AISF New Year's Party on January 20 at the Kajima Hall.
The party started from our preparation for Chinese dumplings in the early morning.
For preparation of Chinese dumplings, not only the Chinese team but also the Nepalese team joined by preparing their delicious curry. They first made dumpling wrappings and two kinds of ingredients and finished to Nepal style dumplings called "Momo" which are similar to Chinese Xiaolongbao (soup dumplings). It seems they enjoyed making Chinese dumplings and eating both.

"Mochi-tuki" (pounding rice to make traditional New Year's cakes) was very popular among children and they got a lot of attention. It was so cute that small children, using a pound (pestle) for pounding rice. It seems interesting and a new experience for the people who saw "Mochituki" for the first time. For the people who were not accustomed to the texture of rice cakes, it took time to chew although it was delicious.
Our Executive Director, Atsumi showed us "Juubako" (beautiful lacquer food box) with "Kamon" (family crest) and we enjoyed "Osechi" (specially prepared New Year's food) in "Juubako".

2017 Raccoons were very active this year. Since the last two months, they started their preparation of a surprise for the ninetieth birthday of our Executive Director.
You may think it would be a routine preparation of presents and cakes with a dash of performance, but they prepared meticulously the presents with their whole hearts. For example, each Raccoon wrote a message card in their home countries's languages and made a birthday pop-up card book. And this pop-up card book was decorated by a picture of an owl which our Executive Director likes.

Especially striking were ninety roses and an "international" cake. Ninety roses consist of well-balanced colors like purple and rich red, expressing a new and brilliant year. The "international" cake was blueberry cake of light purple color and was decorated with the national flags of the country of the 2017 Raccoons. The decoration of two owls on this cake, colored purple and pink, attracted our attention. In such a warm atmosphere, Raccoons sang "Imagine" by John Lennon, with a piano accompaniment. Other participants sang a chorus from lyrics which were given in advance.
Our performance was a great success!

Lastly, we played a bingo game and it was the liveliest event. Not only the kids, but also scholarship students and senior Raccoons were so excited to see gifts of the game. All of them felt invigorated and very happy when they got many splendid gifts.
After having a pleasant chat, we ended the party by taking a group picture.

We will have new scholarship students next year.
We hope we can maintain such family-like and warm atmosphere of the Atsumi International Foundation and we pray for our contribution to love and peace of the year 2018. 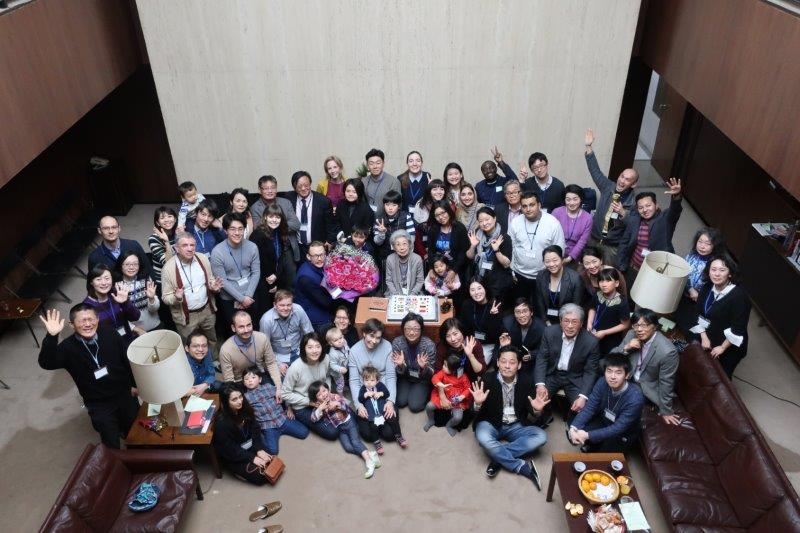