"Natural Disasters befall us when we least expect them." This is a saying of famous Torahiko Terada, Physicist and Essayist (1878 - 1935). I remember I got goose bumps when I read this saying for the first time.
In the early morning of November 22, 2016, there was a big earthquake again in Tohoku Area. We heard the news that the cooling device of the used fuel pool of No 3 Nuclear Power Plant had been stopped when the warning for tsunami was announced. Luckily the cooling device restarted two or three hours later. However, this shocking news got broadcasted in the Japanese Islands and reminded us of the terrible nightmare five years ago.

Five years have already passed since the 2011 Tohoku Earthquake and Tsunami. But, problems of the Nuclear Power Plant have not been solved yet. The situation that we have to live with daily, being scared of the nuclear power station is not solved.
What on earth happened in Fukushima? What is the fundamental problem?
Three weeks before the earthquake this time, Professor Emeritus, Youtaro Hatamura, the University of Tokyo, gave us a lecture at the Hall of Atsumi International Foundation. He gave us an answer to this problem.

Firstly, he rejected our common understanding that a hydrogen explosion caused the radioactive leakage. The correct cause was the decrease of power source for a long time due to the submergence of the panel boards as a result of the tsunami; and it became impossible to cool down the spent fuel pool. In other words, the fundamental reason is that they could not assume the impact of tsunami thoroughly. The most important thing is putting to use this time what we have learned from the accident , though it is important to look deeply into the cause of the accident itself. He pointed out also that human beings psychologically "look only at what they like to look, and do not look at what they do not like to look" and they are apt to be involved in an accident due to insufficient analysis or preparation. Based on such understanding, it will be important to bring about such culture that, in order to prevent such accident, the people involved must discuss freely despite being faced with danger.
He appealed to educate such individuals who can judge and behave by himself looking by his own eyes and thinking by himself. We have to train real leaders.

There were a lot of questions after his lecture. Is it necessary to promote nuclear power plants from a viewpoint of economic efficiency? How are the situation in China and Korea regarding nuclear power stations? Among such questions, conversation between Professor Hatamura and Professor Emeritus Hitoshi Hirakawa, Nagoya University, was the most impressive discussion for me. Both of them agreed that present Japan is covered by "KI (feelings)" and such situation became worse and, especially after the Lehman Crash, it became more difficult to express one's opinions which are different from others. Our society is becoming a society of "ostracism"?

I live in Japan and experienced many strange things. "Feelings", mentioned above, is an example. There is an expression "The nail that sticks out gets hammered in" and it is common in Japan. Their own individuality or difference with others is not admitted.
It is one of the reasons for the incessant bullying in Japan now. Group consciousness or cooperation is wonderful. But if they seek for their own identity excessively, other people feel uneasy and it becomes more difficult to activate society.

Talking of bullying, the news about the first middle grade school boy, who fled from Fukushima to Yokohama due to the accident at the Fukushima Nuclear Power Plant, got into the news. He was bullied and called a "bacteria" or said to be "radioactive" .He finally refused to go to school. He was asked to pay money for classmates amounting to 1.5 million yen, just for classmates' playing or eating being said "you got compensation money of the accident"? I was shocked and disgusted with this. Why can people, who are said to be gentle and sympathetic, be so brutal? There may be some reason for this behavior. I think people have little interest in compensation money or the life of refugees. I think it necessary to spotlight on the people who are forced to live a refugee life, not only from the accident itself.
Professor Hatamura's speech, beside the Fukushima accident, gave us a chance to consider how the present Japan should be.

I was very impressed that a TV announcer repeatedly said "This is a tsunami warning! This is a tsunami warning! Take refuge to higher place! Recall the tsunami five years ago! We lost many by tsunami! Take refuge immediately!"
I was relieved and got a feeling of positive attitude of the people who made an effort to prevent the recurrence of tragedy. . But there is a long way to go.
Torahiko Terada wrote in his essay "Tsunami and Human Beings" that "Earthquake or tsunami befall us with no concern of such ideologies which are obstinate, despiteful and conservative." He spoke also with fervor that in order to prevent disaster, "people have to make an effort not to forget the past record of disasters. This is the only way."
I agree with Torahiko. Terada. It is the only one thing, what we can do, that we keep setting alarm bells ringing accepting the reality that natural disasters which are beyond human intellect may happen. And when faced with a crisis always consider and study the past lessons learned. 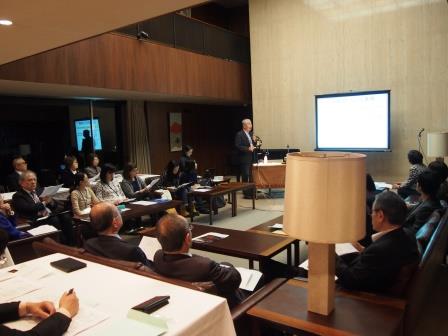