In China, there is a word "bei-pan-lan" which we can find in the "Shiji" written by Sima Qian in 94 BC as the first grand official history among 24 histories.
This word means a scene in a countryside after a banquet where men and women are sitting, drinking, drunken and dancing. Sake cups and plates are scattered all over the place. We can see such scene in "izakaya" (a pub where they serve snacks with drinks) near our university. It is the same now as formerly. Ancient people also got together to talk to get rid of their stresses.

There were elegant or refined banquets in ancient China. In "a feast alongside a small and curved stream"? for example, people have to compose and recite a poem, as a game when sake-cups flow. If one cannot do this on, he has to drink up sake from the sake-cup as a penalty. (There may be some imprudent people who intentionally do not compose a poem because he prefers to drink sake.) Such type of feasts have been introduced to Japan and it is said that ancient Japanese have also enjoyed such type of feast.

Regardless of elegance or lack of it (vulgar), when people get together, tasty dishes and good sake are indispensable. Not only human beings, but also all the gods and goddesses in Japan come together for delicious dishes and sake. The Niiname-sai (The Harvest Festival) is a good example. Gods and people cerebrate new harvest together. At a banquet, gods and people, the positive and the negative (in Taoist philosophy), and the elegant and the vulgar are crossed over and mixed up each other.

In the evening, July 22nd 2016, I was in the court of the Atsumi International Foundation to attend the BBQ party. There were a lot of friends from various countries. There is a quote saying "A friend of mine visits me from a far place; isn't it happy for us all to share?" There are a lot of friends really from far places. Confucius has probably entertained his friends who visited him from far places. There is a record that "there was no limit to sake, but he drank so as not to be drunken." We can guess that this was written secretly by his pupil who saw Confucius drank a few cups of sake together with his friends.

I shouted in my heart "Oh dear!" when I was saying hello to my friends whom I have met at the camp of Tatesina. I forgot to bring "any of the foods which I boast about my home country", which I have been asked to bring. It was awfully too bad for me.
Every dish which our friends brought were very delicious. Salad which Ms. Nam (Korea) prepared, goes well with BBQ meat. "Ratatouille" French style stewed vegetable dish), which Ms. Lindsay (USA) prepared goes well with French bread. After I tasted the curry, which Ms. Bikash (Nepal) prepared, I like to make a trip to Nepal. We can communicate together through food dishes. It gave me a fresh surprise.

I have too many likes and dislikes. First of all, I am not fond of meat and I have not been able to take vegetable until I became an adult. During my childhood, I took only seafood and fruits. But, "Zen meditation" at "En-kakuji" temple at Kamakura was a turning point for me. I visited this historic old temple with full of worldly desires and I have been sitting in Zen meditation from morning till night in cold wind. When I got tired out both mentally and physically, thoughts of my favorite foods went around in my head like "Kaiten sushi" ("conveyor belt" sushi bar). Needless to say, I immediately rushed down to a Chinese restaurant after my Zen meditation. There is an old phrase in China: "Foods are everything for the people (from the viewpoint of Government)". Blood will tell. Since this experience, I have been interested in foods. But, my taste is very conservative and I cannot take beef until now.

When I enjoyed thinking of homemade dishes which my friends, who came from far countries, had prepared, I was filled with hope that I would be OK in any place in the world. Yes, people in the world can enjoy together through food. We can find any food in the world as far as we have friends. We can find friends anywhere in the world, if we find food.

Now, today's subject, BBQ! Corn was delicious. When I took a freshly grilled scallop,
a friend of mine, sitting next to me, kindly taught me how to eat scallop deliciously. Various ingredients made all of us joined. Delicious food and good wine, and nice atmosphere which have connected people since ancient time, connect us now, and also in the future. I thought such things at the BBQ party.

I went back home promising myself that I would try to make Chinese dumplings these New Year holidays. I will be taught how to make a skin of dumpling and want everybody to eat it. And I like to talk together with my relatives and friends. 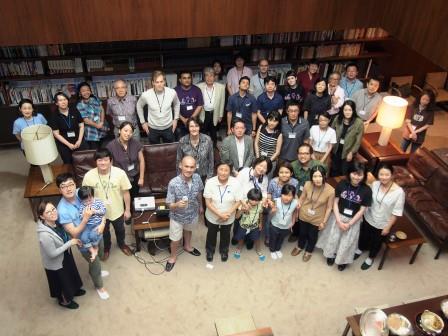