Time flies so fast, like an arrow. When I look back a year ago, I always feel nostalgic
and remember the meeting to discuss the research papers of the 2013 scholarship students, which was held on March 7, 2014. Seniors presented the results of their researches and we listened to the various findings and conclusions presented. I, as a new scholarship student, attended that meeting. One year had already passed since then, and it was my turn, this time, to present my research.

There were twelve scholarship students in the batch of the year 2014. Mr. Abdin Mohamed Omer (who is from Sudan and had been specially appointed substitute teacher at Tokyo University of Foreign Studies) could not attend the meeting because he was conducting a field survey in Sudan. So, eleven students presented the results of their researches.

The meeting started with a report by Mr. Chae Kyeonghoon a scholar from Korea who was studying Japanese avant-garde films in Tokyo University of the Arts. He reported how Japanese films presented non-Japanese nationals, especially Koreans living in Japan, were coping with the change of their consciousness of the new and different environment. The scenes presented in these films were reminiscent of the Renaissance art. Mr. Chae closed his report by introducing his own film of "the scene" of cherry blossoms.

The next reporter was Mr. Cakir Murat from Turkey who was studying Educational Science at the University of Tsukuba. He reported on the problems and the meaning of the changes, in educational points of view, brought about by the introduction of voluntary activities supported by primary and junior high schools. He showed, as an actual example, the "Tsukuba Style" which is being applied in the Tsukuba area as a typical close cooperation of schools and communities.

Then, Ms. Gerelchuluun Ariungerel who is from Mongolia and a student at the University of Tsukuba followed with her report. She was the only student in the scholarship for a science course this year. She was studying the biological effects of proton beam in cancer treatment. As we were all laymen, she explained in such a way that we could easily understand. In cancer treatments, proton beam treatment can more effectively reduce the damages of cells, in contrast to the more damaging radiation therapy.

Next reporter was Goginashvili David from Georgia, and a scholar at the Keio University, studying the Japanese ODA for three countries in the South Caucasus. South Caucasus has common borders with Russia, Turkey and Iran, and is located east of the Black Sea. The region is an important strategic place for both the East and the West areas of the world. Three countries - Georgia, Armenia and Azerbaijan - occupy this region. Mr. Goginashvili reported on the special features of the economic assistance from Japan to these three countries, which are different from aids from Russia and America. It was noted from the report that the features of the aids from these two countries were distinctly different from each other.

Ms. Hu Yanhong from China was a scholar at the University of Tsukuba and was studying Chinese folklore. She reported about the religious lives of fishermen who, in the past, had been living in fish boats on Lake Tai in Jiangsu Province, where she came from. She also reported about the religions of the people who are now living on land in the area.

As the last reporter of the first half of the meeting, Ms. Kim Taehee from Korea who was
a student at the Keio University presented her research on the political and public awareness in the world, particularly those of Japan and Korea. She talked about the improvement in the awareness of political effectiveness in participatory democracy, analyzing the data of elections in Japan, inhabitants' poll and elections of the House of Representatives and Councilors.

The last half of the session started with Ms. Li Hui a scholar from China and a student at the University of Tokyo, who studied traditional carpentry tools in China. She discussed the present situation of carpentry tools development and reviewed the historical role of these tools in ancient constructions based on a technical book which was edited by Li Jie in the Song Dynasty (10th-13th Century).

Ms. Li Ting from China and a scholar at Waseda University was the next presenter. She was studying Japanese expressions in the "Meta-language". She presented an issue of the function of languages, particularly in the context of verbal and written communication that are required and applied in teaching and learning the Japanese language using such meta-language as "I tell you starting from a result...."

The next speaker was Mr. Mohammad Jakfar Idrus, a scholar from Indonesia and studying at Kokushikan University. He was studying the function of a museum as an exhibition in the process of the founding of the modern nation-state of Indonesia. He discussed the subject of exhibitions through the 19th to 20th centuries in connection with the founding of nation-states. He mentioned firstly, that Japan joined or held exhibitions in order to show the excellence of Japanese culture and then explained the aspects and political features of exhibitions in Indonesia during the Dutch colonial period and thereafter.

Next was my turn. I, Ryu Chung Hee from Korea and a scholar at the University of Tokyo, was studying modern East Asia. I presented, my paper which focused on the Korean intellectual, Yun Chi-ho (1865-1945), particularly the linkage between the features and changes of philosophy of the Enlightenment in modern East Asia and the new media such as newspapers.

The high point of the report-meeting was the presentation by Ms. Wang Hui-jun from China, who was taking education at Waseda University. She was studying Japanese grammar aiming at encouraging "context consciousness". She reported on the actual status of the Japanese linguistics of the students in the universities in China using examples of causative (such as the English words rise --> raise, lie --> lay). She emphasized the necessity of education of "context" by teachers to raise their comprehension level of grammar of the Japanese language.

Prof. Tozu gave his impression of all the eleven presenters, recalling his own experience with Koreans living in Japan and his favorable impression of an exhibition featuring the provision of electricity in a small village in Indonesia. Prof. Sato expressed his admiration of all the reports and recommended that future researches touch on the various local cultures in Japan such as that in Aomori Prefecture in order to experience the richness of Japan's cultures. I also like to express my heartfelt thanks to those professors and all the reporters for sharing with us their valuable time and insights.

The meeting started around 2:00 PM and it was already about sunset when it was finished. Although the reporters and participants looked tired, all of us were filled with added knowledge and understanding in our head and heart rather from the results of the year's research.

Finally, the meeting came to an end and I hoped everybody would feel such similar fulfillment in our future researches as we embark on new beginnings. 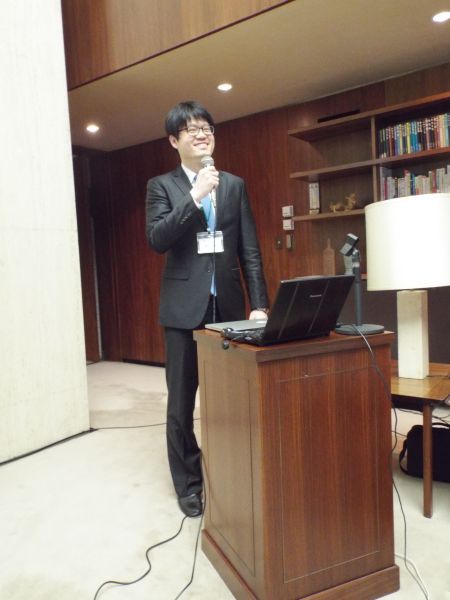