We gathered at the ticket gate of "Sinagawa Seaside Station" of the Rinkai Line at 13:20 hours and moved to the construction site by a micro-bus. We received an explanation about this project from a presentation by the General Manager and his staff.

According to the presentation the Shinagawa Line of the Central Circular Route (about 47 kilometersin total) is an expressway located in the southern part of the Route and measures about 9.4 kilometers. After branching from "Wangan Expressway" at Ohi Junction, the north-bound route consists of tunnels which run under Meguro River and Route 6 (Yamate Douri) and connect with Yamate Tunnel of the Central Route and the Route 3 (Shibuya Line) at the Ohhashi Junction, to the final destination of the route. When this Shinagawa Line will be completed theentire Central Circular Route will be opened and the network of the Central Circular Route will function efficiently. At present, it takes about 40 minutes to travel from Sinjuku to Haneda Airport via the Inner Circular Route, but when the Shinagawa Route is opened, the trip will take only 20 minutes. Traffic congestion in the Central Circular Route will be also relieved and a consequent improvement in the environment would result due to decreased vehicles exhaust gas. From the presentation by the General Manager we came to know the importance of the construction of the Shinagawa Line. We also learned that the contractor (of this construction) is a special joint venture consisting of Kajima Corporation, Kumagai Gumi and Penta-Ocean Construction Co. It was also explained to us that "Sield Tunneling" is applied in the construction of tunnels for the reasons that it is beneficial and protective to the environment.

Before entering the tunnel, we were required to put on helmets and safety vests, which were prepared beforehand for us. As it was the first time for some of the scholars to put on helmets, we took pictures while we were putting on the helmets, in front of the site office. We entered the tunnel by bus. Staff of the project office accompanied us and explained many aspects of the construction of the tunnels. Inside of the tunnel, we noted that construction work was nearly completed. Tunnel lights were on, the paths on the ground were paved and lower parts of the tunnel wall were painted white. More than ten minutes later, we got off the bus and were given another detailed explanation. The management had just installed ventilation fans in the tunnel. All of the light bulbs in the tunnel were LED. Wooden boards installed on the tunnel walls were fireproof and could withstand high temperature. Listening to the explanation, we were nodding and taking pictures. We came to the Gotanda entrance/exit and took group photos. Construction work at the Gotanda was said to have been difficult because there were a lot of underground utility vehicles running around in the work areas. The contractors adopted the "pipe roof arch" system which could minimize works on the ground. We walked along the evacuation passage in the tunnel. Our tour was very exciting and enabled us to learn some important aspects of tunnel construction.

After returning from the tunnel, we exchanged our thoughts and had a time for questions and answers with our host. We stated our impressions and asked questions. Mr. Ryu asked about earthquake-resistance measures for tunnels in Japan given that earthquake occur frequently. We understood from the discussion that the inside part of the tunnels is safer than on the surface because the shield itself shake together with an earthquake, hence does not break when the underground shake. Mr. Li Hui, who is studying carpenters' tools, asked about usage and exchange/replacement of cutters of shield machines which excavate tunnels. We already know from earlier explanations that the external diameter of the shield machine is 12.55 meters which is biggest possible size in the world. To our surprise, this shield machine is only for this particular tunnel. As a shield machine has to be customized to fit the size of a tunnel, it will be built each time a differently sized tunnel is constructed. The tunnel that we visited cost hundreds of million yen.

Mr. Chakir, Murat, who is a scholar in basic pedagogy, asked how to keep the motivation of people who work under the ground for a long time, I also had a question based on my daily experience. In my first experience of driving through tunnels I thought that the shape of tunnels is semicircular based on what I could see. However, from this tunnel tour we learned that a tunnel is circular in shape as the shield machine excavates in a circular manner. This means that a section of a tunnel is a circle with the width of the road as its diameter. We see only the upper half of the tunnel; we do not see the lower half under the ground where there are a lot of piping and inspection passages. When I heard such explanation, I had some mysterious feeling.

As grant scholars in Japan, we specialize in various fields of study, but visiting a tunnel construction site was a first life-time experience for everyone in the group. We learned a lot from this visit as we could feel and understand tunnel construction technology although there seems no direct relation with our daily life.

We had various impressions but it was common that we were impressed by the magnificent construction technology of Japanese contractors represented by the Kajima Corporation.

We like to express our heartfelt thanks to Atsumi International Foundation and Kajima Corporation for arranging such a meaningful tour for us. 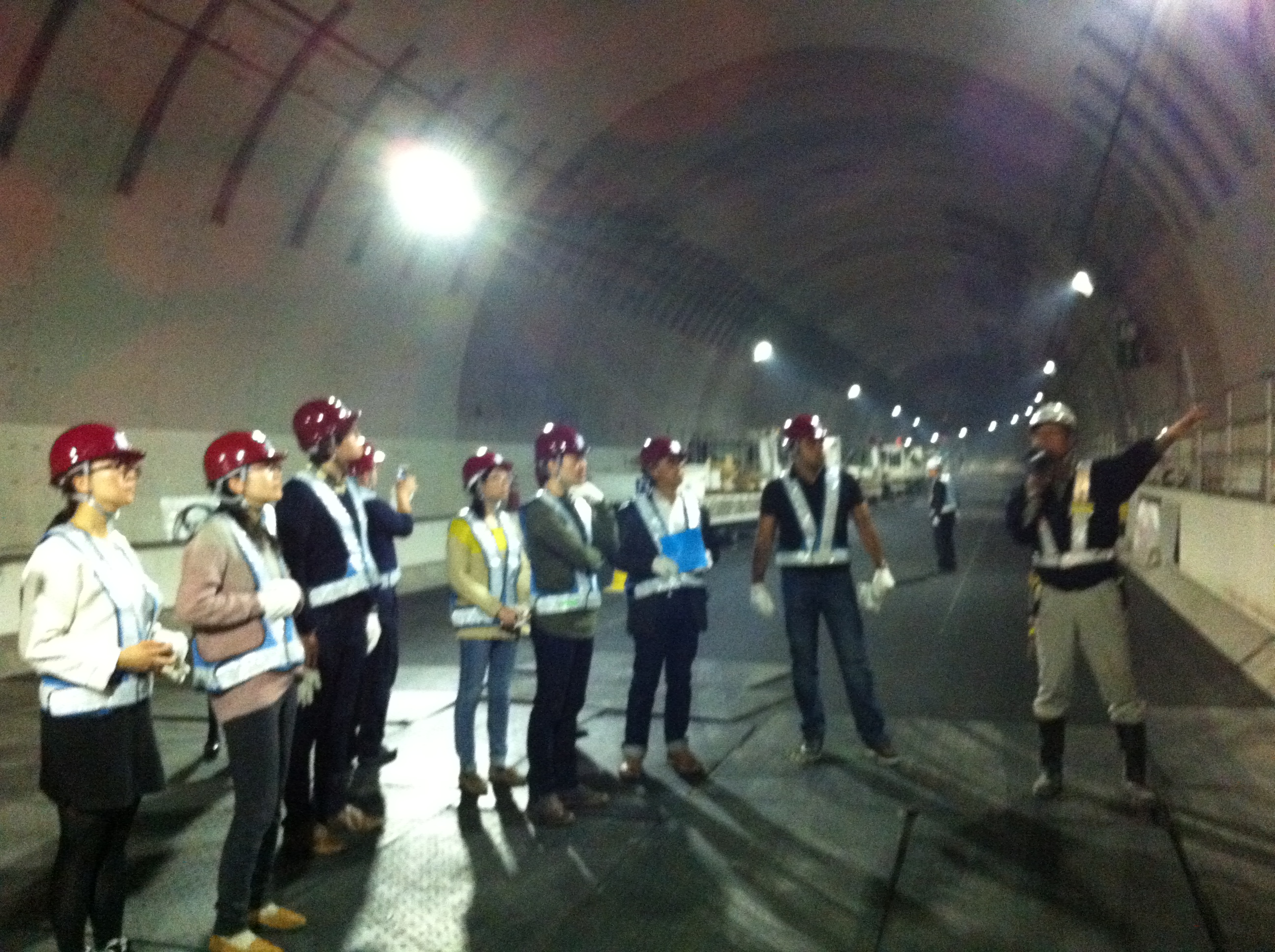