On January 11, 2014, the Atsumi International Scholarship Foundation celebrated its annual New Year's party at the AISF Hall in Tokyo. Atsumi current scholarship recipients and members of "Raccoon-kai" (alumni association) and their families, and staff members of the Foundation, totaling more than 50 persons celebrated the advent of the New Year.

Starting from a toast welcome the New Year, the celebrants proceeded to enjoy the various foods and dishes served. We had Osechi (Japanese traditional assorted New Year dishes), Ozohni (rice cakes boiled with vegetables), Susi, Gyoza (Chinese dumplings), and other delicacies, such as Harumaki (spring roll) or Datemaki (rolled omelet). We also enjoyed the pasta prepared by Massi san (2013 Raccoon).

After the meal, we, the new Raccoons, individually introduced ourselves after the member of the first batch, Shi san (1995 Raccoon), who introduced himself. The party was very merry and lively, and made more so, by the presence of many children, aged from two and half years to junior high school, who were brought along by their parents. A happy feature of the merry-making was the self-introductions by two Indonesian scholarship students (Raccoon 2014 and Raccoon 2010) who are now married (to each other), and are the first scholarship couple.

This New Year celebration was purposely organized to coincide with the 86th birthday of Atsumi Rijicho, Executive Director of AISF. Viktor san (1995 Raccoon) facilitated the birthday party. It is said that "Flowers bloom the same way every year, but people do not remain the same." However, we chose different colors of flowers this year to celebrate, with best wishes, her "Unchanged" good health and happiness by "different" color.

After taking commemorative photos for the birthday of Rijicho, we sang a birthday song in Japanese. Scholarship students of the year 2013 sang a birthday song in their own language and they sent a birthday message to her. Rijicho was very delighted with our birthday greetings. While listening to a song by Massi san (2013 Raccoon), she explained to us the origin of her name "Itsuko", which in Chinese character means the capital of Italy, to commemorate the fact that she was born in Italy.

During the party, we played the game of "trial for luck". Winners of the game were rewarded with gift-tokens or mufflers. The players recalled this game as "paper, stone and scissors" of their youth.

We ended the New Year's and birthday party with a ceremonial hand-clapping which Shimazu san taught us.

Thanks to the warm support by AISF, we had a fulfilling year last year. And, we thank AISF again for letting us start our New Year today as part of the Atsumi family.

Photos of the day by Ngoc 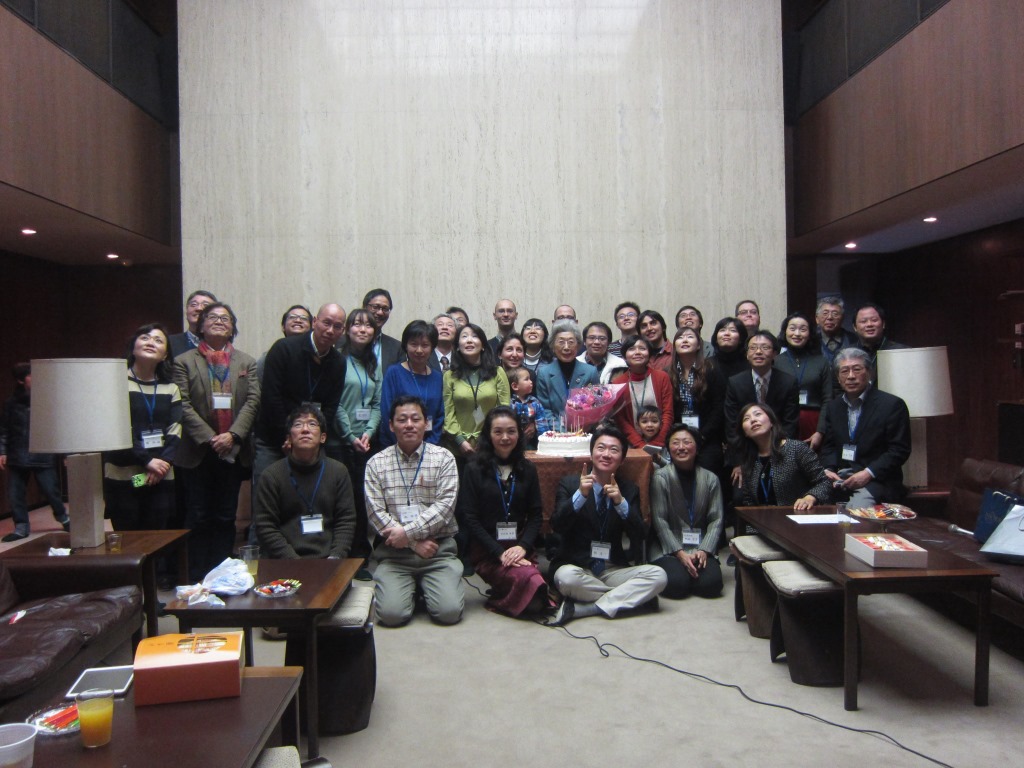