Although the planned departure for the Tateshina trip was not till July 5th, the call for confirmation of participation came around early May. I was thinking that the trip was still far off. It seemed that all of the other scholarship recipients for fiscal year 2013, who were dazed and confused from the daily work on their doctoral dissertations, were thinking the same way. I remember confirming this with the others many times during the trip.

The morning of the departure was a bit cloudy. Since the gathering time at Shinjuku was at 8:45, I had to wake up earlier than usual. I arrived at the gathering point on time, but there were already many people who have arrived before me. Perhaps it was the early rising on top of meeting each other after one month, but as the scholarship recipients got on the bus, there was a growing feeling of being aloof to each other. Most of the people had two seats to themselves, and not much conversation was going on.

There was no traffic. After two service areas, we arrived at our first destination, Suwa Garasu no Sato. The cloudy sky that hung over Lake Suwa enveloped it in a strange silence. We had a buffet lunch of bread at the restaurant inside the building, with a view of Lake Suwa.

After the delicious meal, we took time to appreciate the glass handicrafts before taking the bus to Suwa Shrine. I felt overwhelmed by the majesty of the shrine, being one of the oldest in Japan and the main shrine for Suwa shrines all over the country. Deep in the green of gigantic trees, I felt a cleansing of the heart as I walked the long alley twice. People were having a good time drawing and comparing fortune slips.

We left Suwa Shrine and at last reached our final destination, Cheruto no Mori, at a little less than one hour earlier than scheduled. The current scholarship recipients at the Taiko Tateshina Sanso, which is an elegant building mostly made of logs, befitting the name "Sanso" (mountain cottage). From the sofa lounge, the outside view could only be aptly called "Mori" (the forest). Some who walked around during the lull up to dinner said they saw deer.

After an exquisite Japanese dinner, we enjoyed an "ice-breaking" time at the lounge together with Rijicho, and people from Atsumi Foundation, SGRA, Raccoon, and Cheruto no Mori. Under the guidance of the instructors, we were able to deepen our fellowship with the other participants and nature, through unheard games. Since the activities of the next day will be starting early in the morning, the first day officially ended with this activity. However, in my room of three girls, the conversations continued till late in the evening.

On the second day we had the SGRA workshop, under the topic of "knowing, feeling, and thinking about nuclear power." We first listened to the talk of three experts in the morning. In the afternoon, the program involved breaking up into small discussion groups. It is a fact that I have not had the opportunity in my daily life to "know," "feel," and "think" about the problem of nuclear power, despite its importance. Through the information and perspective about the different aspects regarding nuclear power presented by the three experts, I became aware of my vague and oversimplified thinking. It was at the same time a moment of deep remorse.

We were divided into groups during lunch, where we talked about what we were doing two years ago on March 11, 2:46 PM. Everyone vividly remembered that time as if it happened yesterday, and were engrossed in the conversations so much so that we were not able to leisurely enjoy the "Oginoya Kamameshi"(Oginoya's kettle rice bento). In the afternoon, full-blown discussions started. There were fervent discussions on the task of coming up with a Japanese character that could be associated with or express nuclear power. It was extremely interesting owing to the variety of group members composed of different ages, nationalities, and field of specializations. For us who usually are in the university and do not have so many opportunities to meet people with rich social experiences, it was a particularly significant moment in terms of getting the opportunity to be in touch with such people. Anyway, all the members of my group actively discussed for more than three hours, and did not even for one moment stray from the main issue (but, my group, which discussed so fervently, carelessly enough was not able to have enough time to prepare for the reporting on the next day!)

After the workshop, we had the much-awaited fabulous dinner at the golf club. We were also joined by the folks of Cheruto no Mori, and in a lively ambiance, were able to talk with a lot of people while partaking of different dishes. After the dinner, we took a bus to the accommodations, and ultimately had a "nijikai" (second round meeting) at the Taiko Sanso. Compared to the previous day, everyone certainly was having fun. It was a bit relaxing helped along by some alcoholic drinks. With the rain, the forest was a bit more fragrant, ending the second day.

The morning of the second day opened with the presentation of the results of the group discussion. The space outside the venue was filled early with groups busy with their preparations. During the actual presentations, each group effectively conveyed in an original way its chosen kanji (Chinese characters) and the discussion content. The six groups respectively chose "hito (person)," "wa (circle)," "chikara + chikara + chikara (strength + strength + strength)," "chi (wisdom)," "ine (grain)," and "fuku (fortune)." The presentation format was a contest, so there was an awarding ceremony after the presentations. Everyone was laughing as it turned out that each group received an award with fanciful names. Finally, there was time for everyone to share their thoughts with each other by writing these out in a white card and pasting it in a board.

After lunch, we all left Tateshina Cheruto no Mori after finishing all activities in the itinerary. I may have been imagining, but the atmosphere in the bus on the way back was certainly livelier than it was on the way in. As we alighted from the bus in Tokyo, the feeling sank in that the Tateshina trip was now over, and already I was beginning to miss the two nights and three days. It was Tanabata as I fearfully hurried home wrapped in the hot humid air, and the echoes of the trip. 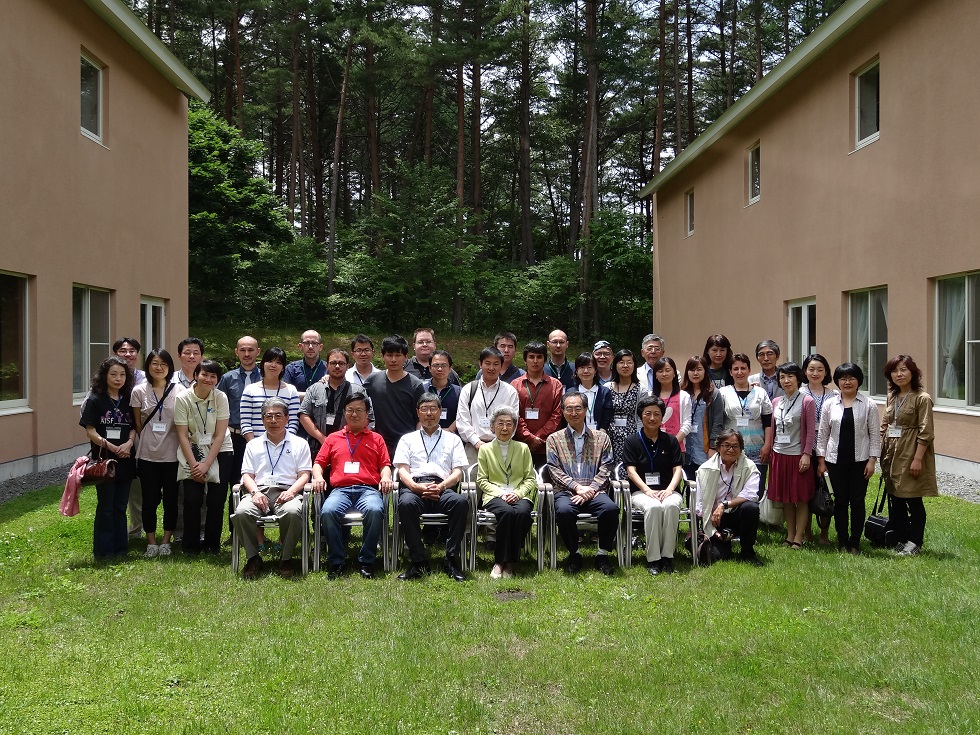