In his very interesting talk, former Ambassador Numata recounted his personal experiences in describing how Japan, after the Second World War, worked toward postwar reconciliation with the UK. He first gave an overview of the three aspects of postwar settlement: legal settlement, apology, and then reconciliation. Referring to his period as Deputy Foreign Ministry Spokesman from 1991 to 1994, he then talked about how the expressions by the Prime Ministers and the Chief Cabinet Secretaries regarding such matters as Japan's wartime invasion and colonial administration shifted from "remorse" to "apology" from the time of Prime Minister Toshiki Kaifu's speech in Singapore (May 1991) to Prime Minister Morihiro Hosokawa's General Policy speech (August 1993). Moreover, in Japan, the question of how Japan should come to terms with its actions during the war in the Asia-Pacific remained unresolved for 50 years after the war while an ideological internal Berlin Wall divided the country. This, plus the tendency to consider the matter as a problem with Asian countries, were behind the fact that the problems of former American, British, Dutch and other Allied POWs and civilian detainees did not figure prominently in the consciousness of most Japanese.

Ambassador Numata explained in detail how the transition from "catharsis of grievances" to "reconciliation" was accomplished through the combined efforts of the Japanese government and the non-government sector during his assignment at the Japanese Embassy in the UK from 1994 to 1998. He recounted how in 1995, the 50th anniversary year of the victory over Japan, there was since the beginning of the year a flood of criticism of Japan by the British media. Japan's dignitaries were not invited to the VJ Day, which was framed as a commemorative event only for the UK and the Commonwealth. However, the German and Italian heads of state were invited to the VE Day by the UK government. He pointed out that the UK government and media took the brunt of the "catharsis of grievances" of British soldiers who had been sent to the Burmese front and were treated coldly by the British people as the "forgotten army" when they returned after the war in 1945.

He explained that the "Murayama Statement", i.e. Prime Minister Tomiichi Murayama's Statement issued on August 15th 1995, became the Japanese government's official apology based on a Cabinet decision, addressed to the former British POWs as well. This appeared to have calmed down the media's criticism of Japan. He emphasized that the way towards reconciliation was paved not only by the government but also by people in the non-government sector. He explained in detail how the circle of Japanese/British reconciliation widened from the governments to embrace non-governmental volunteers and then individuals. For example, the "Burma Campaign Fellowship Group (BCFG)" was established in 1990 and held mutual visits with its Japanese counterpart, the "All Burma Veterans Association of Japan". These two groups went on a joint pilgrimage and held joint memorial services on what used to be the Burma front with the participation of 36 volunteers and family members from both Japan and the UK in February 1997. Mrs. Mary Grace Browning, a Japanese language teacher at a secondary school in Suffolk, and Mrs. Keiko Holmes, a Japanese living in the UK, were actively involved in their respective voluntary activities to bring the former POWs and the Japanese people closer.

The ambassador also talked about his own personal involvement in the process of reconciliation such as his active appearances on BBC and other radio and television channels and his attendance at a UK-US-Japan reconciliation ceremony at Coventry Cathedral on October 5, 1997. More than a hundred people, including former British POWs and their relatives and volunteers and associations involved in the reconciliation efforts, came to the farewell party that he gave on January 9, 1998, as he was leaving his post in London. Finally, he pointed out that the Japanese/British postwar reconciliation proved successful because conscious efforts were made to place it always in the overall context of favourable Japan-UK relations.

After the talk, there were various comments such as "Why did the Japanese/British postwar reconciliation become an issue as late as the 1990s?", "Is it not necessary to review Japan's Showa history?", and "Would it not be possible to overcome the twisted relations with neighboring China and Korea, with whom tensions have been rising due to problems such as the Senkaku and Takeshima Islands, given that reconciliation was reached with such a geographically distant country as the UK?". The talk was meaningful in making us think about the future direction of settlement between Japan and China, as well as between Japan and Korea.

A reception followed after the talk, with Atsumi Foundation Trustee and Japan Professional Tennis Association Executive Directress Naoko Sato giving the opening toast. There was a lively exchange among the guest and participants, while enjoying Chinese dishes. 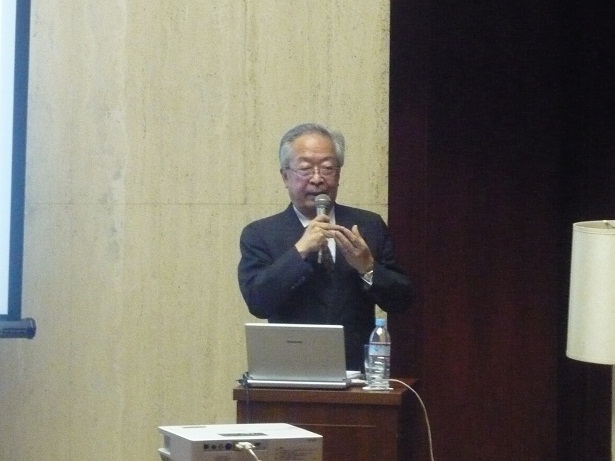