On September 18, 2012, amidst the simmering anti-Japan demonstrations all over China, triggered by the nationalization of the Senkaku Islands, a Raccoonkai in Beijing was held at the second floor of the Shaoyuan in the Peking University. This year, on the proposal of Jin Xi (1995 Raccoon), we were planning to go to the Yunnan Restaurant, but we had to change to a venue where we can talk in Nihongo without worry, since the situation has not yet settled down. Actually, the SGRA China Forum scheduled for the next day under the theme "Volunteer Overview" was cancelled under the advice of the university administration. Nevertheless, I and scheduled speaker Miyazaki Yukio decided to push through with the Beijing visit on the grounds that "It is precisely in such a time that private sector interaction is needed".

This evening's participants, in addition to the three mentioned above, were Sun Jianjun (2002 Raccoon), who will be sent to the Confucius Institute of Waseda University this October, Piao Zhenji (2003 Raccoon) in china dress, Li Chengri (2006 Raccoon), who has transferred to the Chinese Academy of Social Sciences from September, Nemekhjargal (2008 Raccoon), who kindly came from Hohhot which also cancelled the Forum, and Yu-san, who is the student and source of pride of Sun-san, who has gotten employed in a big bank in Tokyo. Unfortunately, Song Gang (2008 Raccoon) and Liu Jian (2008 Raccoon) were not able to join due to school duties.

As usual, the conversation was on a wide range of topics. The problem of the Senkaku (Diaoyu in Chinese) Islands was not really discussed, and before we knew it, it was already very late in the evening. Peking University was, as usual, peaceful, that it was really a strange for the China Forum to have been cancelled. 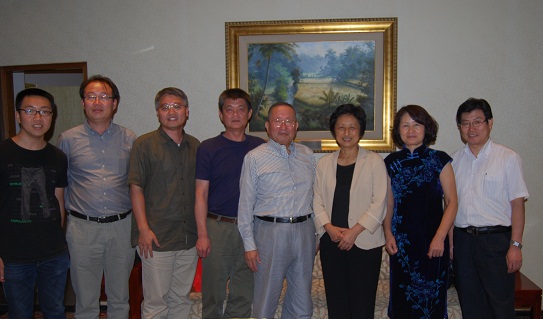