The Atsumi Foundation annual trip to Tateshina was held this year from the 6th to 8th of July. Having never been to Nagano prefecture before, I was very much looking forward to the trip, as well as to having a relaxing, informative, and hopefully fun-filled weekend with fellow scholars.

6th July (Friday)
Most of the participants (including myself) gathered at the designated meeting place near Shinjuku station at just before 9am. Everyone seemed excited and happy to see each other, as well as eager to start the weekend trip. As it hit 9am we all boarded the bus, and took off for Nagano shortly after.

Excluding stops at the various service stations, our first destination for the day was the Suwa Glass Village and Kitazawa Museum, where we were also scheduled to have lunch. One of the museum's friendly staff greeted us at the door, and gave us a brief explanation of the museum. Before looking at the exhibits, we enjoyed lunch prepared by the museum restaurant -- a delightful bread buffet, as well as soup, salad, and chicken. We were told by one of the staff that the record for most pieces of bread eaten was fifty (if I remember correctly!), and she deftly challenged us to break that record. As far as I know none of us succeeded in meeting that task, and I myself humbly consumed a mere eight pieces. Nevertheless, it was a most satisfying lunch indeed.

Following lunch we were taken to the museum area, where we were also given an explanation of the various types of glass and art works that were on exhibition. We were scheduled to head over to the famous Suwa Taisha Shrine after the museum, but unfortunately it had started to rain quite heavily. As such, we headed over to main branch of the museum instead, where we had the opportunity to peruse works of art by Emile Galle as well as paintings by contemporary Japanese artists. After this we got back on the bus and were taken over to our accommodation area. The 2012 scholarship recipients were allocated the Taiko Tateshina Lodge, and as we entered the lobby most of us were taken aback at what a splendid place it was. The lodge was in the midst of greenery, and looking out from the veranda one could see a forest of trees -- instant remediation for the soul.

Following a delicious dinner, we were treated to a talk about the Onbashira Festival, an event that only takes place once every six years. We were shown some video footage of the last festival that took place in 2010, and got to ask one of the main organizers various questions about the event. After this presentation there was a brief round of introductions, and shortly after we headed over to the lounge where we enjoyed refreshing beverages, snacks, and good conversation.

7th July (Saturday)
The SGRA Forum was scheduled for this day, and those of us who got up early managed to take a brief walk around the surroundings before the event, and feel envious of the people owning cottages in such a wonderful area.

The Forum itself was very interesting and thought-provoking, and with the theme "Future Schools" also managed to spark up a heated debate amongst the participants. Conversation about the presentations carried on well after the forum was over, and during the reception that was held afterwards at the Golf Club one could often hear the debate continuing amongst various groups of individuals. The reception was a wonderful opportunity to mix with our seniors, as well as the distinguished guests of the forum. I was so engrossed in conversation most of the time that I even forgot to sample most of the sumptuous-looking buffet spread. Due to rain the scheduled fireworks unfortunately had to be cancelled, but nevertheless it was a more than satisfying evening.

8th July (Sunday)
This was to be a day devoted entirely to the barbeque. Those of us who would be preparing dishes headed over to the barbeque venue early, and swiftly got to work in the kitchen. It was a relatively small kitchen for a relatively large number of cooks, but we all somehow managed to maneuver our way around and relish in enjoying the delightful aromas of each other's cooking as well as friendly conversation. A really international smorgasbord of dishes was prepared -- Italian bruschetta, Korean delicacies, gyoza, Turkish cuisine, oden, as well as various other culinary specialties. Not to forget the sumptuous grilled meat, which is what makes a barbeque a barbeque after all. Whilst enjoying the wonderful spread of food we also enjoyed each other's company, and before we knew it it was time to clear up and head back to Tokyo.

A wonderful weekend filled with good food, good conversation, and newly-made good friends. This trip to Tateshina made me once again feel grateful to have been accepted as an Atsumi scholar, and I'm sure that all of us 2012 scholars felt refreshed and ready to get back to work after such a wonderful retreat! 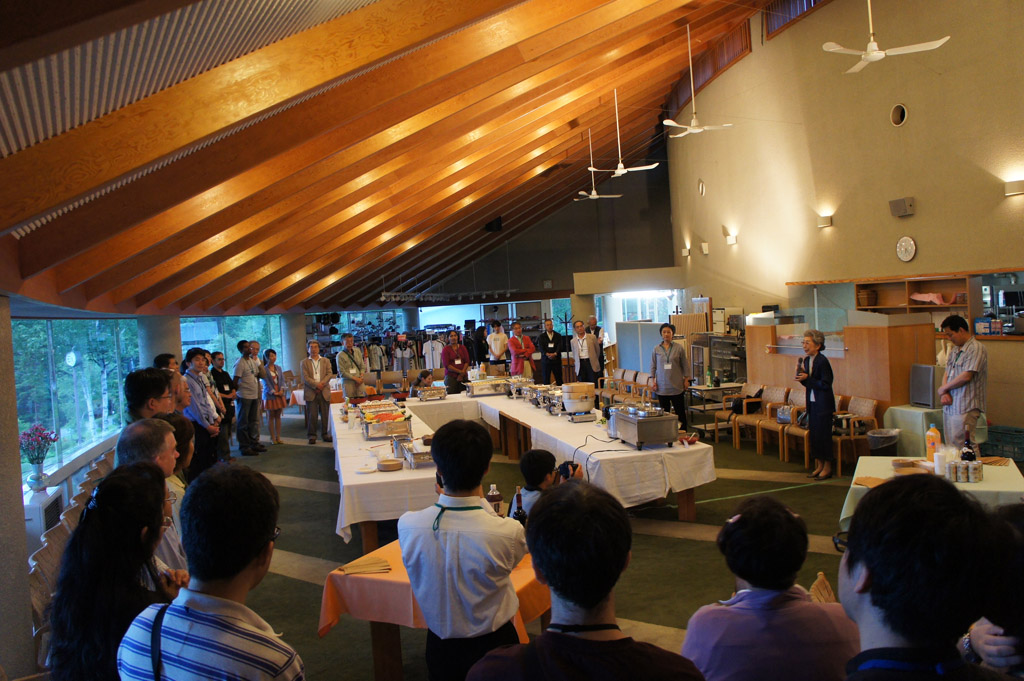