On January 14, 2012, around 50 people gathered at the Atsumi Foundation Hall to celebrate the New Year. Quite a number of family members also joined this year, so the New Year's party was a bit livelier.

The party was originally set to start at 11, but more than half of the participants arrived early to cook up their favorite native dishes. The cooking of Chinese dumplings, of course, was brimming with the most enthusiasm! Starting from making the wrappings, it did not take even two hours to cook up dumplings for fifty people. Ho Van Ngoc-san kindly took charge of cooking the Vietnamese Pho Beef Noodle. It was really cool to see a manly figure roll up his sleeves and focus on cooking. The Korean team completed the Japchae
and Jeon, this time, with a lot of help from Kim Eun Hye and the wife of Chong Soonil. There was also the tea salad and tea of Myanmar. The tea was really delicious, and I simply lost track of how many cups I drank.

Finally, the dishes were ready, so we started with a toast. This year, the mochi-tsuki was kindly done, in perfect synchrony, by the Ye brothers. After partaking of the food and beverages, we had self-introductions by each one in the party. People shared their feelings for the New Year after experiencing the Great East Japan Earthquake.

We all celebrated Riji-cho's 84th birthday. The recipient scholars of fiscal year 2011 came early in the morning so as not to give away Operation 007, and prepared a lovely cake, flowers, and a greeting card. Riji-cho greatly enjoyed it all.

After that, we had the usual Atsumi Foundation New Year's Bingo with a big pile of prizes for the taking. This year newly-wed couples were early in getting prizes, to everyone's approval. 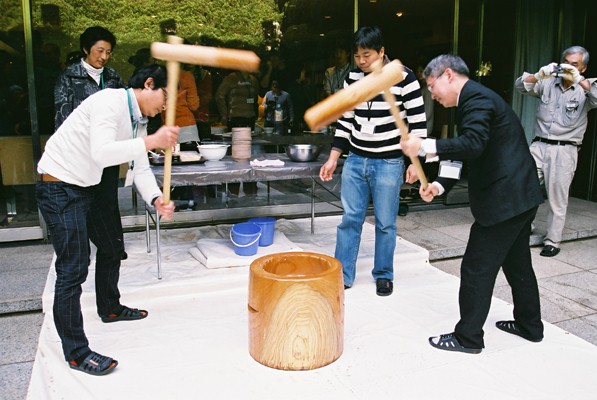