On April 29th, the plane carrying Imanishi-san and her third daughter, Mizuho-san, landed in Shimane Prefecture. Wenchang Yeh-san (Raccoon 1999) and Jin-Hee Yoon-san (Raccoon 2010) were waiting for Imanishi-san at the lobby. Yeh-san came to work for Shimane University in 2010, while Yoon-san accompanied her husband who came to work for the University of Shimane in 2011.

Right after arrival, we headed to the lodge. There are many hot springs in Shimane Prefecture, such as Tamazukuri Hot Spring, Umishio Hot Spring, and Onsenzu Hot Spring. So, Shimane Prefecture is a place to enjoy hot springs. The car carrying us four ran through the curved valley pass dotted with villages and rice fields, and was overtaken by a single-car electric train, before finally arriving at the lodge.

By then, it was time for supper. A feast was laid out in an open-hearth-style table. A toast started off the Shimane Prefecture Raccoonkai. We do not quite remember what we talked about, but the drinks were coming, and things got going as everyone got intoxicated. After an hour in the hot spring, it was time for bed.

The next day, we headed straight for Izumo Temple, which is famous for housing the match-making god. Quite naturally, everyone bought a talisman. The fortune sticks of Izumo Temple is said not to foretell bad luck. Yeh-san thinks that this is a bit boring. Another thing for which Izumo Temple is famous is a bold stylized straw rope that separates sacred Shinto precincts from the unclean outer world. If a coin tossed into the rope gets jammed in, then fated encounter is said to visit the thrower. People were gathered below the rope and were earnestly throwing coins. Before we knew it, Yoon-san was among the crowd. Yeh-san noted that "No way she can do it the way she throws", but superbly threw one jammed in. Yoon-san comments, however, that two coins dropped out as her coin was jammed in. One fated encounter for the price of two. What a realistic idea.

After the worshipping, we headed to a restaurant famous for Izumo buckwheat noodle. We were able to finally get in after lining up for one hour. After enjoying sweet azuki-bean soup with rice cake, we headed to the Adachi Museum, which is a famous Japanese garden that has been the number one Japanese garden in America's Gardening Magazine as well as a 3-star holder in The Michelin Guide. We could not wait to visit the place. It was a pretty garden, and Taikan's paintings and Ro Sanjin's ceramics were both very attractive.

After taking in the view, we had supper in Matsue at a drinking spot that served local fish. We were looking for Nodoguro fish, and since reservations had to be made in the morning, we called in that morning and reserved one out of the three Nodoguro, as well as two pieces Okinoshima oyster. Expectedly, the nodoguro and oysters were well received. This also "makes coming over to Shimane worth it", praised Mizuho-san, adding that it could be a reason the Michelin three-stars.

It was time then for Yoon-san to take the 2-hour and a half journey to her home. Imanishi-san stayed at the Hotel in Shinjiko Hot Spring that night. For two days and night after that, the Shimane Raccoonkai included visits to the Road of Gegege no Kitaro of Sakai harbor, Daikon Island, which is famous for peonies, and ended with a return to Matsue to ride in the Tourism Ship sailing in the moat within the Matsue castle walls. Looking forward to the next Shimane Raccoonkai! 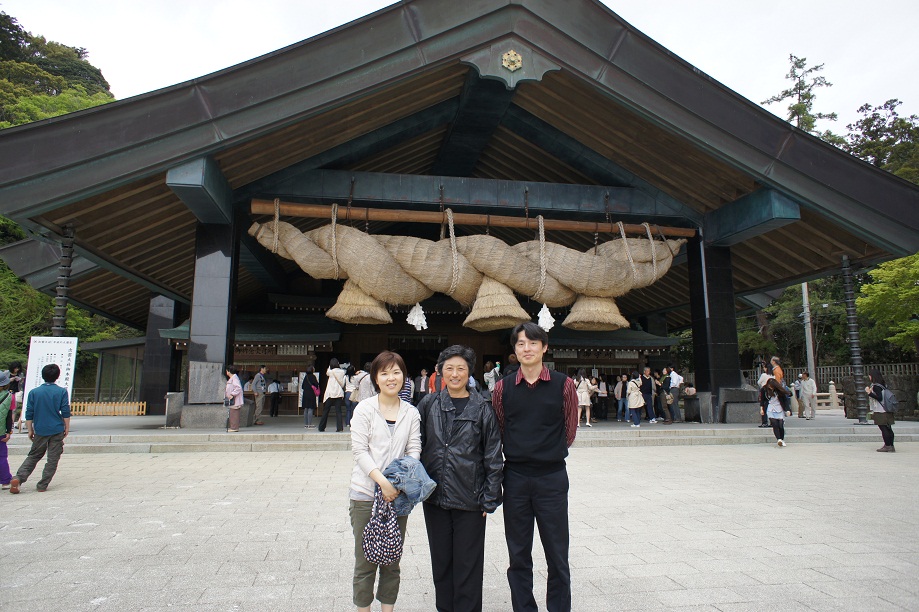