According to the calendar, March 5, 2011 (Sat) is "Keichitsu" It is said to be the day of awakening for insects which were dormant during the winter. We were blessed with good weather, cherry blossom buds were smiling under a cloudless blue sky. In such a splendid day, the Atsumi International Scholarship Foundation's Research Presentation Meeting for Fiscal Year 2010 was held at the Atsumi Foundation Hall in Sekiguchi, Bunkyo-ku, Tokyo from two o'clock in the afternoon.

The Report Meeting was attended by about 50 people including the current and next fiscal year's scholarship recipients, guests, and the officers and staff of the Foundation. The entrance to the venue was spectacularly decorated with seven steps of Hina dolls, which made the venue's ambiance even more congenial.

The Report Meeting started off with greetings from Directress Itsuko Atsumi who shared with us her thoughts about the Hina Festival, which symbolizes Japan's spring festivities, interspersed with episodes of her personal Hina dolls.

This was followed by research reports. Twelve scholarship recipients, five from the natural sciences and seven from the social sciences, reported on their respective dissertations using PowerPoint slides, following the rule of explaining within 15 minutes in terms that even a child could understand. The reports covered a variety of multi-disciplinary research themes: the study of Buddhism, the study of archaeological preservation, Japanese literature, the study of history, materials engineering, national language education, nuclear engineering, intelligent function system, political science, Chinese studies, bio-material engineering, and gender studies. The natural science people used colorful material such as illustrations, pictures and video, while the social science and liberal art people presented detailed examples. It was unavoidable that technical terms were used so there remain parts to be digested, but the fervor of the recipient students regarding their research was felt and enveloped the venue.

After the research reports, brief comments were made by three guests: Prof. Shogo Watanabe (Toyo University), Prof. Kohji Mitsubayashi (Tokyo Medical and Dental University), and Prof. Tatsuo Sato (Tokyo Institute of Technology). Referring to his personal experience as a foreign student in India, Prof. Watanabe said that "in learning, there is the "upward gate" and the "downward gate" but the latter is more important than the former, so I want you to be keeping an eye on the ground while going upwards." While deeply impressed with the fresh perspective and depth of the research of the scholarship recipients, Prof. Mitsubayashi and Prof. Sato mentioned their respect and gratitude for the support and multi-faceted assistance towards the foreign students by the Atsumi Foundation. All the professors were saying that the scholarship recipients should be active in various fields, and play central roles in his/her own field.

After the conclusion of the report meeting, there was a social gathering at the same hall where the old and new foreign students, foundation officers, and guests were able to engage in conversations, and deepen exchanges. The common language was Japanese, but sometimes one could hear Chinese, Korean, Russian, and French, among others.

Entering March, the cool air of winter still remains, but the sunshine is slowly and steadily becoming more like spring. The scholarship recipients should keep in mind the following words of Managing Directress Junko Imanishi "It should not be the end for this fiscal year's scholarship recipients. No matter where you go, let us keep in touch." The scholarship recipients, like dandelion seeds, are off to a journey, riding on their hopes and dreams. Atsumi Foundation would be a hometown overflowing with warm radiance.

Photos by Maquito
Photos by Tanihara 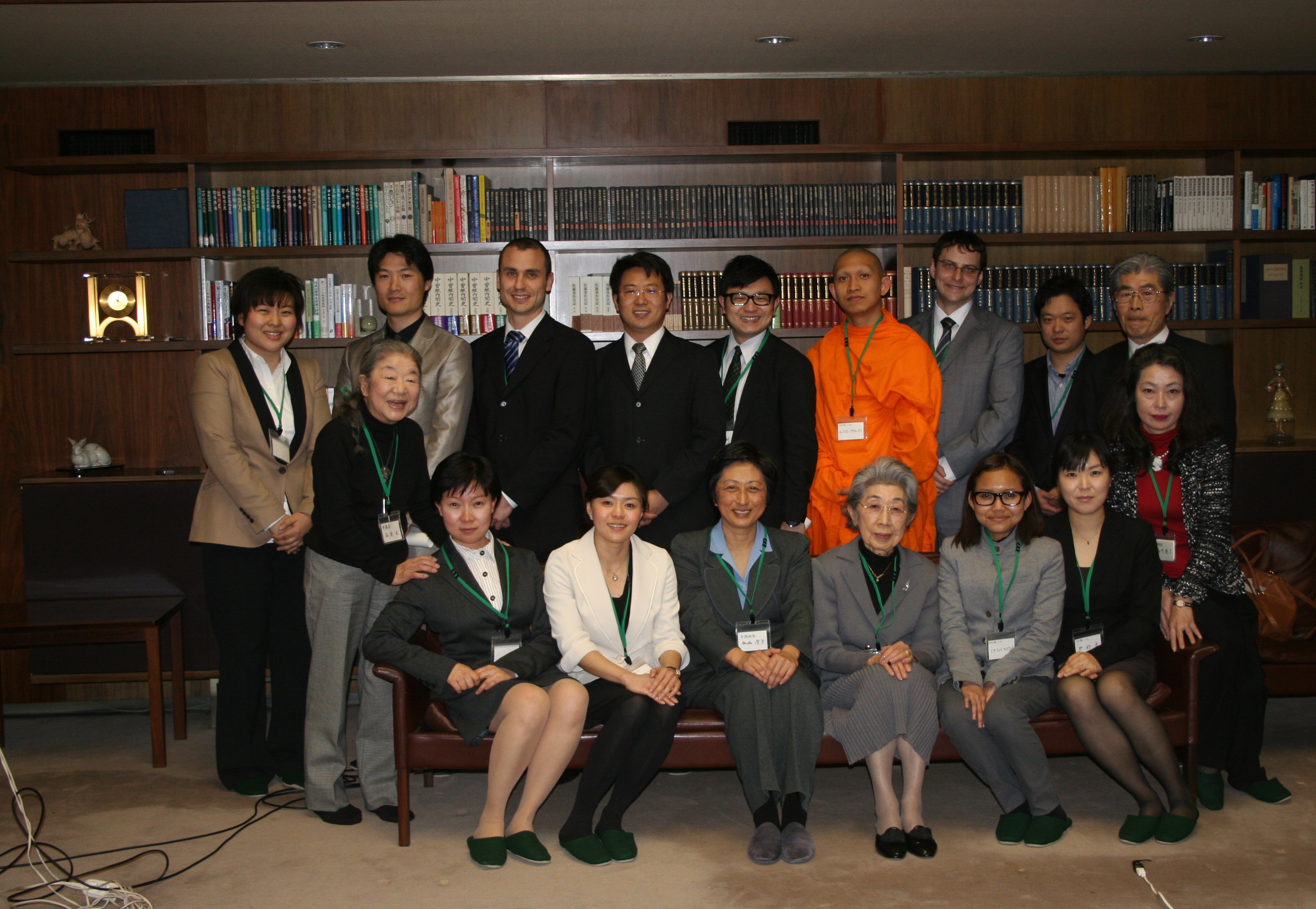