The Atsumi International Scholarship Foundation held its New Year's party last January 15, 2009 (Sat) from 11 AM to 4:30 PM at the Foundation hall, where more than 40 people consisting of Raccoon members and their families gathered.

At this New Year's party, 2010 scholarship recipients cooked up delicious native dishes using very rare ingredients not often seen in Japan. For example, Mya prepared a traditional Indonesian dish, fishes cooked in banana leaves, and Housam (2009 Racoon) made a special Syria soup. It was a good opportunity for all the participants to taste very traditional dishes that they might not have the chance to taste a second time in their life as long as they do not visit the scholarship recipients' home countries. The other dishes served were boiled dumplings made by the 'Chinese team', Korean, Turkish and Japanese dishes.

We also came at 8 o'clock at Atsumi Foundation's hall to prepare some French traditional food. The first dish we made was a salmon and a bacon taste 'quiche'. Quiche is an oven-baked dish made with eggs, cream, vegetable, fish or meat and cheese in a pastry crust. The second dish we made was stir-fried chicken with French mustard, sage and rosemary. This combination of ingredients is very uncommon in Japanese cuisine so we were a little worried whether the participants would like it or not, but everybody seemed to have enjoyed our food. It makes us very happy.

The meal was followed by a 30-second self-introduction by everyone present and then by the celebration of Rijicho's birthday. This year Jeon Jin Hwan-san (2001 Racoon) made a special cake and everyone sang birthday songs to Rijicho in his/her own mother language.

Then followed the BINGO game. It was particularly funny to see Jeon-san's fervor, hoping to get the good numbers. While playing and watching everyone getting a BINGO, I felt like there would be good things for everybody all the year round.

We ended the party with Shimazu-san teaching us a new form of 'nakajime' with clapping hands. We needed to practice several times before eventually doing it right.

It was a very nice New Year party where we could enjoy eating delicious food from various countries and talking to everyone.

(Written by Mathias and Ko) 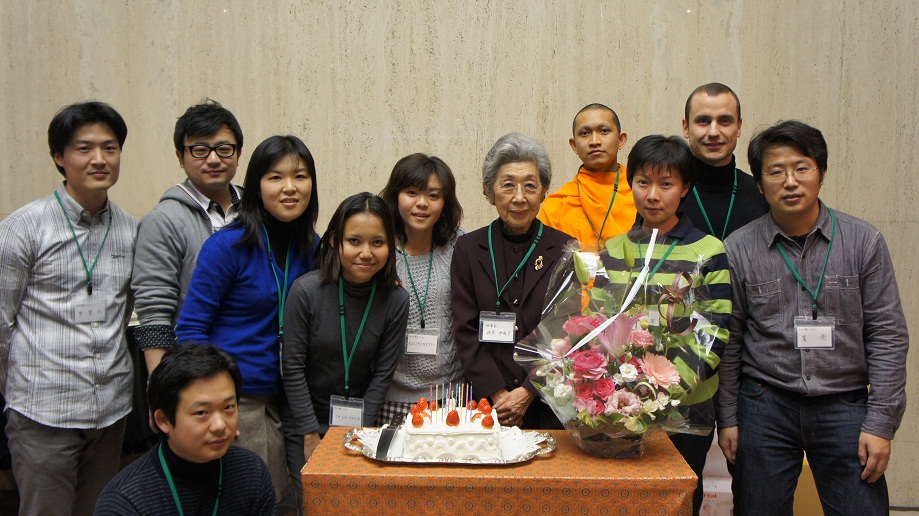