It was an early evening on May 14, 2010, when the Boston Raccoonkai was held in a lobster chain restaurant, the Legal Seafood, in Kendall Square near MIT. Imanishi San, flying all the way from Tokyo to New York and then to Boston, led a toast with Yuepeng Wang (1997) and family, Youngjune Park (2002) and family, Zimin Meng (2004) and Kevin Wong (2005). A round of deep fried calamari and clam chowder followed by whole steamed lobsters became the menu of the night.

While enjoying the lobsters, Raccoons were talking about the most recent ranking among the Asian universities. A recent release of Quacquarelli Symonds 2010 Asian University Rankings shows an astonishing result, that University of Tokyo is ranked 5th, behind three universities from Hong Kong and one university from Singapore.
The ranking is based on 60% of research, 20% of teaching quality, 10% of employer review on graduates and remaining 10% of international recognition.

It is of no doubt that University of Tokyo would have had a lower rank if the number of foreign faculty has been taken into great consideration; nonetheless that weighing factor is 2.5%. The focus of the ranking is research quality of the universities. To achieve a high ranking the university needs excellent peer review, a large number of papers per faculty and a large number of citations per paper. In Hong Kong, university faculty are always criticized to be overspending their efforts on research but not on teaching, and the ranking uncovers the reason why Hong Kong university professors are so tense to publish a lot of journal papers in order to keep and to survive in their position. This is also the reason why the salary of a faculty in Hong Kong is sky high, despite the fact that GDP per capita of Hong Kong is lower than those of USA and Japan. (2008 figures: US=$48K, JP=$38K, HK=$30K, KR=$19K, CN=$3K)

This is the real world. There is always a trade-off.

Three interesting Chinese terms came out from Meng Senpai. The terms "haiguei" (turtle), "haidai" (seaweed) and "hailiu" (ocean current), respectively meaning returning graduates, returning graduates becoming jobless and graduated but staying overseas, have become fashionable among Chinese students. The accelerating economics in China has attracted lots of graduates to become returning turtles, or returning seaweeds. This has impact to students who are choosing between staying in China to get a degree or going overseas to study. Nowadays Chinese students who can go abroad to study are not restricted to those who are performing well in school, but also those whose parents can afford. Meng Senpai will return to Japan and Park Senpai will return to Korea later this year when their sabbatical leave end. The number of Boston Raccoons will be greatly reduced next year.

Indeed during the whole evening, there was a parallel Raccoon-cub-kai. Two Raccoon cubs (kids of scholarship students), Julie and Jaewon, were playing with so much fun as if they have known each other for a long time. Destiny brought all of us to Atsumi Foundation, and again destiny brought our kids to Karuizawa getting to know each other. Every kid who went to Karuizawa could remember nothing but 2 things, a huge black dog and a foreigner playmate. Vovo, Malcolm San and everything in Karuizawa will serve as our good memory forever in our life. The upcoming summer SGRA forum will be held in Tateshina. While enjoying the nature and hot spring there, do not forget to prepare some activities for the Raccoon cubs.

The gathering was brought to continue in a coffee shop where the Raccoons continued to chat and the cubs continue their chasing, catching and screaming. It came to an end at 9:30. It was a pleasant and wonderful night and everyone have enjoyed it.

Three quotes to share.
"We all are global citizens, so we shall meet at somewhere in the world again." Zimin Meng
"Isn't it pleasurable to have friends come from afar?" Confucius
"Thank you for taking the T. Don't forget your belongings." Boston MBTA

Photos of Raccoonkai in Boston 2010 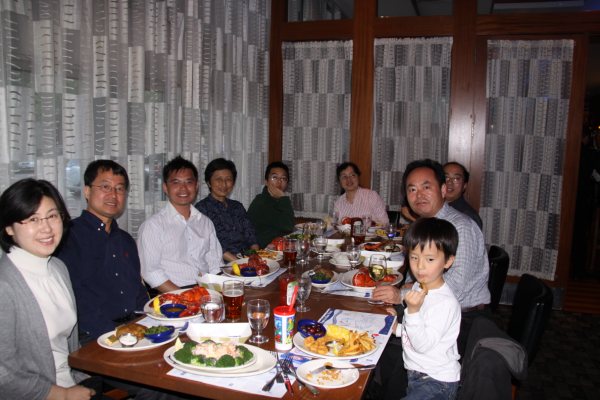