It was rush hour as soon as I got up! "Tonight I am going to be sleeping in cool Karuizawa?" I thought. And with a feeling of going off to some festival, I locked the door to the house.

Huh? Arriving at Tokyo station, Tanihara-san's familiar face was lined up with new faces. After exchanging brief self-introductions, all aboard into the Shinkansen. I have often been in formal gatherings of universities, academic conferences, and professors. But the thought of this being a private get-together made me tense but mixed with some curiosity, as I took my seat.

At the Training Center, Lim Chuan Tiong-san greeted us at the doorsteps "Welcome!" with a smiling face. We set down our baggage, and after finishing lunch, we went hiking up the mountain. As we went up the foggy mountain road, I felt the distance between people shrink. Reaching the top, I felt the "desu" and "masu" evaporating from the conversations. Researchers, who tend to be locked up in their laboratories, appeared to be surprised that there was always great outdoors waiting for them.

In the evening, the self-introductions, thanks to Shim Choon Kat-san who would rival television talents, were transformed into a comical stage. Even those who came with their families had to answer the list of questions by Shim-san. "Persons or things you don't like?", "Persons or things you like?" To top it all, the one doing the self-introduction had to ask the next person to be introduced a question before going back to sit down. As I talked while gripping the mike, I felt as if I was on TV.

During the free time of the next morning, while going around looking at the neighboring resort homes, we were tempted by one house, which had a sign on the gate saying "Feel Free to Come In" Unlike the surrounding houses, this one was of the early Showa period, and the owner upon seeing us foreigners said, "Pease come in", and kindly gave us a tour inside. We all took a fancy on the outside appearance of the building, but liked it even better as we were shown the inside. It felt as if we were in a time slip, as we looked at the furniture inside.

In the afternoon, the study period began but it was somehow different from the feeling of academic conferences that I have come to be used to. Of course, this was not because it was the first time I joined in with slippers on, but it was because there was a sense of a bond being born as I talked, walked, and ate together with the other members.

In the SGRA Forum, I found myself taking a lot of notes: of how I might have had a strong geographical sense that was centered on Turkey as I listened to the features of East Asia's "Civil Society"; of how I thought at the level only of Japan and not of a "Japan inside Asia" and of how "East Asia" could be one unit when thinking about issues.

After supper, even though there were a lot of empty beer cans at the dining hall, unbelievable as it may be the discussions were lively but logical. In my mind, I confirmed that "Researchers are researchers irrespective of alcohol!" So after the forum, the voices could be heard from the lobby deep into the night.

The rain, I often think, is capricious. And so it was. The planned fireworks were cancelled because of the rain. I came to know of my favorite incense-type sparklers, or Senko-hanabi, after coming to Japan. There is not much at the beginning, but the incense fireworks gets larger like our worries in life. And even the incense-type sparkler is destined to lose out to time just like our sadness. Not being able to light up such sparklers was the only thing I regretted.

With the mountain hiking and forum over, today the fun of barbecue awaited us. I woke up slightly sad at saying goodbye to the lodge's wooden flooring and furniture to which I have grown familiar. For a brief moment, I was made to feel like Heidi by the small house in the mountains surrounded with greenery. It would have been complete had there been goats.

From the Training Center, we all walked up to Rijicho's home, conversing along the way on roads with trees pressing in from all sides. I could understand why Karuizawa is so famous. We greeted the owner of the early Showa house. If only I were staying in Karuizawa, we probably would have been good neighbors.

At the barbecue at Rijicho's vacation home, everyone seemed to be comfortably mingling. It was a long time since I have had mutton shish kebab, and this was the third thing I looked forward to during my stay at Karuizawa.

Everyone somehow looked happy. The group trying to hit the watermelon blindfolded, souvenir photo taking, the people listening to each other about their country's situation, people exchanging business card, people continuing on from yesterday's discussions. The person beside me whispered "I am surprised that the people here are all so kind!" I just smiled. In the Shinkansen going home, the faces around Tanihara-san were no longer new.

Through my stay in Karuizawa, the thing I am most grateful for was the ability to closely interact with people who normally I could only approach in a formal manner. I have been drawn close by the hospitality of Atsumi-san and company and the warm-hearted reception to us foreign students. The Karuizawa trip left me with a feeling of having established another family in Japan. I thought that I would be sitting again with everyone in the yellow sofa of the Training Center. But, this year we had to bid farewell to the Training Center in the forest. I was lucky to be one of its last guests. 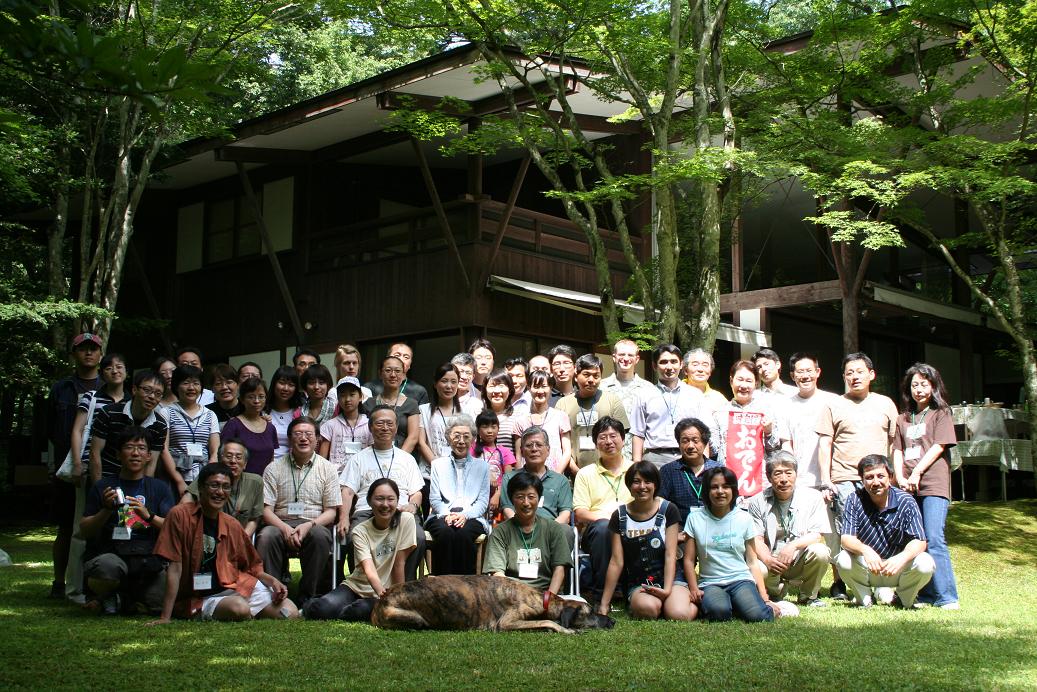