A Raccoon Kai was held by the Korean Society of Raccoons (KSR) on October 12, 2008 from 12 noon at Min’s Club in Seoul’s Insadong district.

The restaurant was the residence of a descendant of the relatives of the unfortunate Queen (Queen Myeongseong) of the end of the Chosun Period. It is the first building wherein a traditional residence (Hanok) was reformed into Western fashion. It is now being used as a restaurant but it is also important in architectural history and has been designated as one of Seoul’s folk cultural treasures. The food is not traditional Royal cuisine but fusion arranged in Western style. From the outside the restaurant looks like ancient but the inside is a blend of the Korean and Western styles.

Always at this time, we have a Raccoon Kai but as you know, a local screening of scholarship applicants to the Atsumi Foundation for Korean applicants has been set up, so the Raccoon Kai was held along with the interviews. After that, Shimazu-san, who was present for such screening, went on a mini tour of Seoul. We (Shimazu-san and Han)watched the musical “JUMP”, which is said to have become world-famous (but despite that most of the locals have not seen it) and is based on Taekwondo movements.

In the twilight, we(Imanishi-san, Shimazu-san and Han) took a walk along the Cheonggyecheon river, which was revived when President Lee Myung-bak was still mayor of Seoul city. After which, we(Shimazu-san and Han) visited the Deoksugung Palace in front of the Seoul City Hall up to 8 PM(!) and went into the museum found inside the Palace.

During the walk along Cheonggyecheon river, Imanishi-san wondered “why does everyone gather underneath the bridge?” Thinking about it, there were some people seating along the river bank but why were most of them under the bridge? Were it in the middle of the day, people would try to avoid the sunlight, but why so many undue the bridge in the waning light of the sun? It is hard to understand how people think.

Similarly, at the exhibition of Latin American great masters at the museum, there was an overwhelming feeling of groping from “No, I don’t understand” to “I think I understand a bit”. The world of arts is a bit difficult for me, as I struggled with the questions as to whether it is something to behold without understanding or to firmly understand the given explanation.

After I brought Shimazu-san to the guest house of Kookmin University, in the taxi, I had an intense discussion with the taxi driver about scholarships and human resource education, as it relates to Korea’s corporate ways of doing things.
It was an opportunity to muse over the busy everyday life immersed in nature and the arts under the full moon night of a clear autumn day. Let us once in a while glance at the sky sometimes. 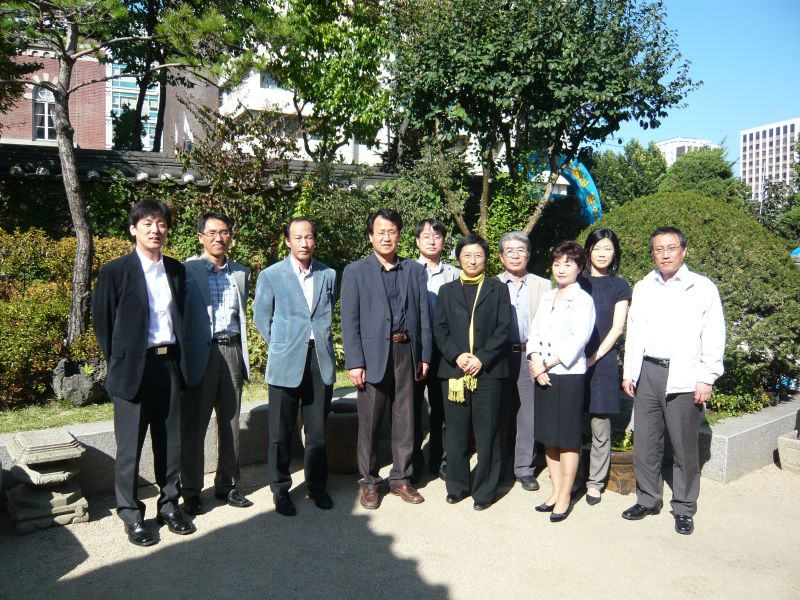