1. Appetizer: A pain of wisdom tooth with a wife’s betrayal

I took my first Bullet Train ride, and opened my first Tokyo Station lunch box. At that instance, my fervent gaze at the pink roasted salmon was blocked as the face of one person came to mind. It was the face of the dentist. A white cap and white mask. “Eating is forbidden two hours after having a tooth pulled out”, the despicable voice echoes in my ears. Not enjoying a feast in front of one’s eyes. Is there a pain more worst than this in this life?! So did I scream in my mind.
As if my cry was heard, my wife, who was sitting beside me, responded. With a charming smile, she skillfully took the salmon. This made me think. The most painful thing in this life is a wife’s betrayal.

It was in this condition that we arrived at Karuizawa station. We were spared making the same mistake as our senior, Park-san, who went all the way to Nagano last year.
Upon entering the laughter-filled training center, our turn for self-introduction came. I did not want to destroy the atmosphere of the gathering, but I wanted to get back at my wife. The result of these two conflicting motives was that in front of everyone, I started to talk about my wife as a bad wife. The next day, my fellows would tease me many times of how “my wife likes meat”.
After the fireworks, Shulatov-san’s mini seminar started. The talk was about Japan-Russia relations from the end of the Japan-Russian War up to the First World War. Within the short span of 10 years, Japan and Russia have signed friendship treaties three times. To me this looked more like a fragile rather than strong friendship between the two countries. It seemed like an age wherein friendships are made and broken without any hesitation for the sake of national interests.
The first day came to a close amidst fervent singing well into the night. In my dream, I became as hot as Wang-san.

Today’s main dish, the 32nd SGRA Forum, started from 2 PM. Four scholars presented about the Olympics’ birth, changes, and prospects. For most participants, it would be the first time to be made to think about the significance of the Olympics. As a national of the hosting country, I also fell into deep thought.
Presently, my meditation was disturbed by a high-pitched voice. It was my Singaporean sempai Sim-san. Representing Southeast Asia [based on consultations with Vietnam, Cambodia, and the Philippines], he protested the argumentative mood that centered on Japan, China, and South Korea. It is said that heaven did not make man to be on top or below another. Maybe that is so with regards to the right of receiving education. However, the world’s nations are from birth unequal. Aren’t there many countries that do not meet objective standards for hosting the Olympics due to geographical and other factors? ?This is how I thought about it, although it may not jive with Sim-san’s thoughts.
Personally, I was moved by the will letter of the late athlete Tsuburaya. I thought that stirring up the natural emotions of human beings was exceptionally simple.
The second night, I lost to the left-handed Wang-san in a right-hand wrestling game.

Thanks to Sim Sempai, Chinese and Korean scholarship recipients of fiscal year 2008 and Kawasaki-san arrived safely at Rijicho’s vacation house. The Southeast Asian group appeared to have been very active.
The scale of Rijicho’s vacation house easily surpassed my imagination. It was embarrassing to compare with my dreams of having a 3LDK unit.
Barbecue time!
Japanese red rice and oden, Korean kimchee, Vietnam spring rolls, Turkish bean salad, Chinese stir-fried dishes decked the dinner table. There were more nationalities than types of food. This is another first for me. The barbecue place became the utopia before the building of the tower of Babel. During the meal, I was quite impressed by Xiu-san telling me “your tooth seems to be fine”.

I arrived at Tokyo Station in the evening. The exit for the bullet train changed into the entrance for a steam dragon. Wrapped in hot air, I suddenly became nostalgic of the forest, river, insects, and evenings of Karuizawa.

Please look at the photos of Karuizawa from the following links:

Photos of Karuizawa 2008 by Olga

Photos of Karuizawa 2008 by Tanihara

Photos of Karuizawa 2008 by Shimazu 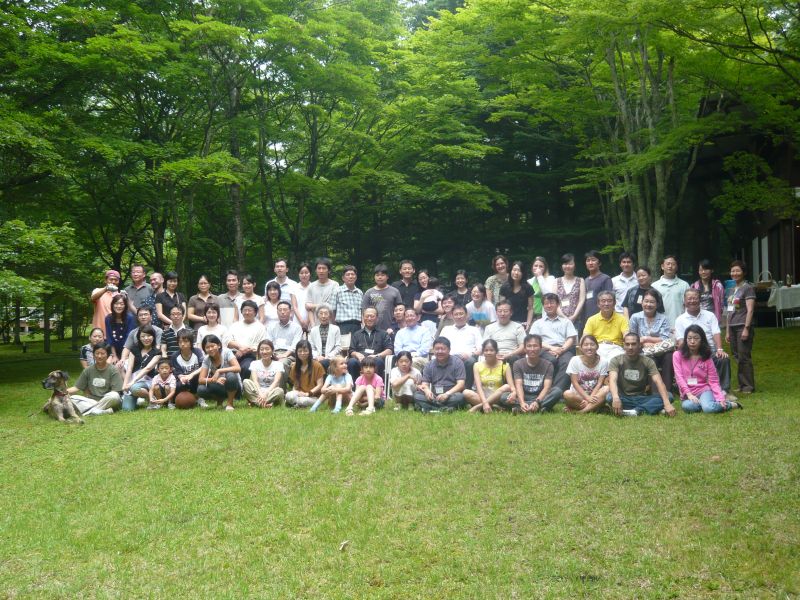