Visit to the Haneda Construction Site

On July 2nd (Wed), coinciding with the monthly meeting for July, the officers of the Foundation and all of the Atsumi scholarship recipients for fiscal year 2008 visited the construction site of the expansion of the Haneda Airport runway. The formal name for the construction is “Tokyo International Airport D Runway Construction”. There were four from the foundation, including the Executive Directress Itsuko Atsumi and Managing Directress Junko Imanishi, and ten foreign students who participated.

Sixty percent of the domestic flights in Japan are using Haneda Airport. Demand has been rising rapidly and the airport is already operating at its limits. There are currently three runways A, B, and C, making the under construction D runway the fourth. With the construction of the D runway, the present takeoff/landing capacity of Haneda Airport would rise from about 300,000 times to 400,000 times. D runway is located offshore and is constructed using both pier structures and landfill. Kajima Construction heads a joint venture consisting of 15 companies. The structure will be completed on 2010 at a total cost of 570 billion yen. As an environmental consideration, a pier structure, covering 1/3 of the runway, was included so as not to hamper the flow of Tama River. This is the first in the world to have a mixed pier and landfill runway construction planned from the beginning.

After the briefing, we headed to the construction site aboard a ship after having donned safety helmets, lifejackets, and gloves. Being enclosed for long periods within their laboratories, the foreign students were all very excited. Everyone climbed on top of the roof deck and enjoyed the feeling of freedom with the wind blowing on their faces. There was a small episode of somebody’s helmet going overboard but otherwise everyone was safe and sound. Construction work was going at a fast pitch. The pier portion has progressed a lot. We saw a ship full of landfill. After about an hour cruising around the construction site, we returned to the office.

After returning, there was time for some Q&A, and I raised my hand to ask a question. I wanted to know by how much the cost of the construction went up due to modifications in design so as not to hamper the flow of Tama River. According to the person-in-charge, this design was not simply a consideration on the part of the client and construction companies, but it was also in accordance with the detailed standards set by the law. I came to realize how Japan has adequately set up laws related to the environment. I did not get a clear answer, but was not that particularly keen on the cost, but I did make some (rough) calculations on my own after going home. The calculations are as shown below.

Knowing that: landfill portion is 2/3 and the pier portion is 1/3; and cost is divided equally to the two portions (570.0÷2=285.0 billion yen for each portion). In the case of using only pier construction, the cost would be 285.0×3=855.0 billion yen. In the case of using only landfill construction, the cost would be (285.0÷2)×3=427.5 billion yen. Consequently, the modification so as not to obstruct the flow of Tama River increased the cost by 570.0−427.5 = 142.5 billion yen. This is a very big amount. Considering this, it is unfortunate that there are many countries that destroy the environment through reckless development, even in today’s times when there is a rising concern for the environment in the world.

There was also a question on the durability of the pile jackets. Head of construction works, Mr. Yoshikane Sakamoto gave a very detailed answer. We are very grateful to Kajima Construction for preparing this on-site visit.

After the visit, we walked around Odaiba, had dinner together and chatted while drinking delicious beer.

Photos taken by Vroni can be seen from here. 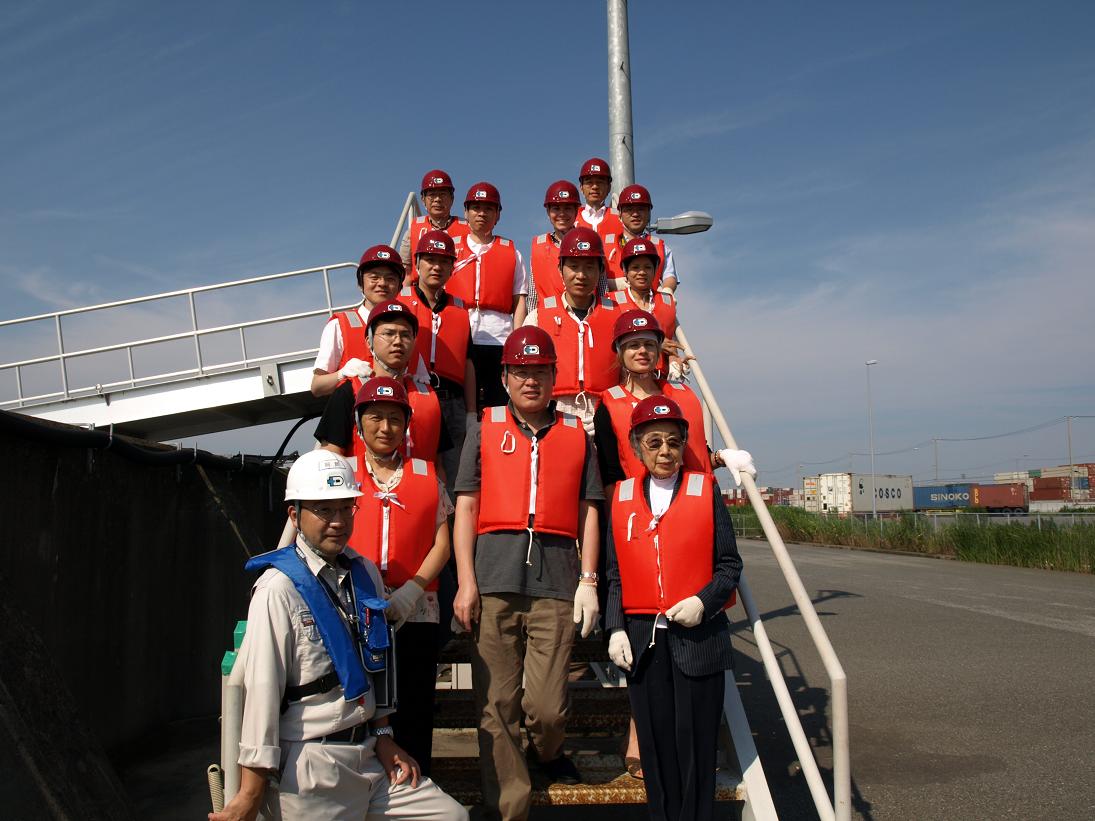