The Seventh Gathering of Korea Society of Raccoon (KSR)

The Seventh KSR dinner was held at 7:00pm on Saturday, April 21, 2007 at the Korean Barbecue Restaurant “Sariwon” in the Gannam district of Seoul. I learn a new thing at every KSR, and this time, I learned that Sariwon is the place name in North Korea, a new capital of the Hwanghebuk-do District, that was constructed after the war. I have not inquired yet as to why this restaurant is thus named.


The Gannam station is in the business area of the city but also very popular among young people and sometimes is very crowded. Luckily, the restaurant is a bit away from the central area and should have been more quiet … unfortunately, there are a group of young Japanese tourist who were so noisy as they enjoyed themselves. Their room was the other end of the restaurant but their voices and screams were as if they were in the next door…


We have found that the mailing list is not functioning well. Some of the emails returned or did not seem to have reached the recipients. We need to check those email addresses before the next KSR gathering.


After dinner we reviewed KSR and discussed that we should do something more as Imanishi-san comes all the way from Tokyo (although Seoul -Tokyo became a day-trip distance thanks to Gimpo-Haneda flight 8 times everyday). It is not so easy, however, to add something more as everybody is so busy …..


The group photo is by Dr. W H Kim, who is now “involved” in photography. Please compare it with the previous one. As for the involvement, Our Chairman Dr. N C Lee is in golf and luckily he could reduce 2 inch from the measurement of his waist size. He is really in good shape!


Let all of us live healthy both physically and mentally!!! 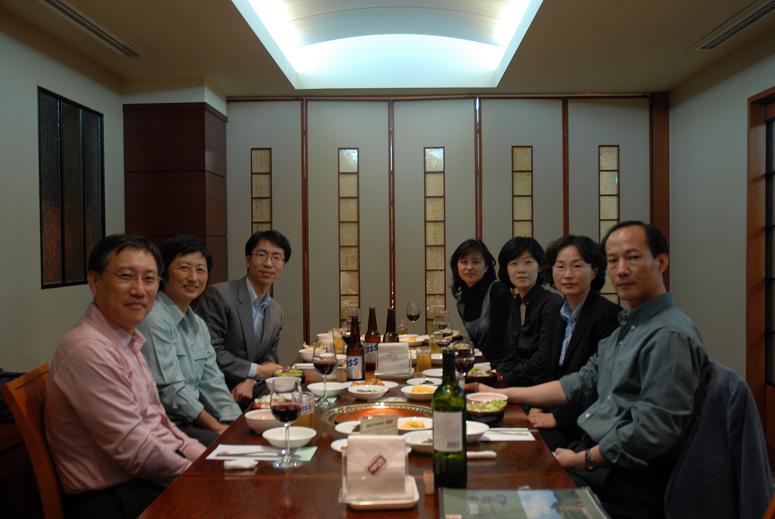