A Korean Raccoon meeting was held in the evening on October 21st, 2007 in Seoul, where its members got together after a long respite. The place for the meeting was a small Korean restaurant near the Grand InterContinental Hotel. Unfortunately, Imanishi-san, the Associate Director of the Atsumi Foundation, was not able to attend, and we had to start the meeting without her.

Although each member did not report on how everything goes, everyone seemed to be spending busy days. After having a certain amount of meal, someone began to reminisce about the old days studying in Japan and each person talked about Japan of the time they studied. Among them, the most interesting topic was about the rice shortage in Japan nearly two decades ago. Junior fellows, including Hyun Seungsoo (2006 Raccoon) who recently returned to Korea after finishing studying Japan, were very curious about it. At the end, there was a suggestion to get together with each one's family next time, and we discussed it. Although the idea has not been concretized, calls for realizing it increased.

Although it was really too bad that we could not meet Imanishi-san, we had a good time to see each other.

I am really sorry to have cancelled the Korean Raccoon meeting on October 21st in Seoul in the last minute. The first reason to have missed my flight was because I forgot something and had to get back to my home. Moreover, as the international airline in Haneda airport was overcrowded with flights to Shanghai in addition to Seoul, I had to go to a parking lot for domestic flights; I gave up a super low-price ticket and tried to take the next flight, but unfortunately every flight was full. The transnational movement of people from Tokyo to Seoul, to Shanghai is tremendous! I was disappointed not to attend the Korean Raccoon meeting. I apologize to everyone having gathered to the meeting.

Since all of JAL flights from Haneda to Gimpo were also fully booked on Monday, eventually I took a flight from Narita to Incheon. Although I missed the Raccoon meeting, I finished my jobs as a judge of Korean-Japanese Students Singing Competition in Kookmin University and my another volunteer activity of CISV. I returned to Tokyo on Wednesday. At the Kookmin University, I was taken cared off by Nam Kijeong-san so I was able to get a glimpse into active development of the Japanese Studies Research Institution.

Everyone, don't feel bad about this and let's meet again in Seoul next spring! 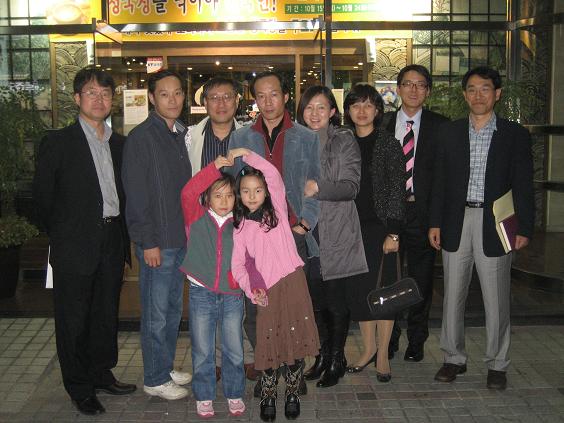