Displayed on the walls of this Pyongan-do restaurant with 40-year history are the signatures of prominent politicians including: Korean President Lee Myung-bak, Senator Chung Mong-Joon, Seoul Mayor Oh Se-hoon. Personally I like Dongchimi, the specialty of this restaurant. Dated pots of this daikon kimchi are buried under ground in the restaurant. We had Obok-jenbang, in which beef tongue and breast meat are cooked with vegetable in a brass pan on the table. This cuisine is famous because Kikuchi Kan (1888-1948), the famous Japanese writer praised it when he ate it in Pyongyang.

Topics of conversation were: the new president who was visiting Japan next day, and the new selection system of AISF scholars with interview to be held in Seoul.

After coming back home, I realized that we should have gone to the nearby Cheonggyecheon, which must have been beautifully illuminated, for group photo. As you know, President Myung-bak restored this river stream、which used to be a covered drain, when he was still the Mayor. This place became the relaxation spot for Seoul citizens.

Dr. Nam and Dr. Park extended the invitation to the SGRA forum in Karuizawa in summer. The theme of the forum is Olympics. It must be a hot topic!!! Let us get our work done as soon as possible and meet in Karuizawa!

by Han Kyoung Ja, trans. By Imanishi and Maquito 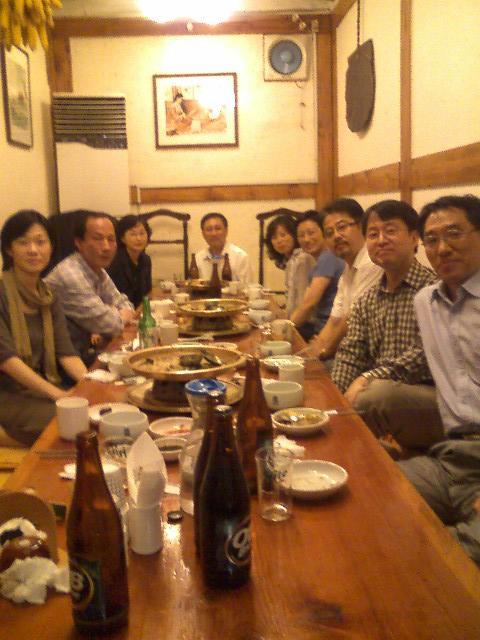